Democrats Prefer to Kill the Economy Than Re-elect Trump.

Remember, killing the economy is the same thing as destroying our nation. Of course, AOC knows nothing about anything, typical of most kids graduating from college. They emerge more stupid than when they went in, especially low intelligence minorities like AOC.

The US was built on immigration alright but 95% of immigrants came from Northern Europe up until 1965. This is why the US became the most successful social and economic experiment the world has ever seen. The Democraps sabotaged that in 1965 with the the Immigration and Nationality Act which completely overturned and completely reversed that successful legacy and history.  Since then, we have 90% non-white and maybe 10% white immigrants streaming into our country.  I say that to remind people of the non-white destruction of this country thanks to Democraps. You can see it in AOC, who has the adult mental age of about 16 yo., typical of Hispanic persons. That may be unfair. I don't know her intelligence. But Somalians, Guatamalans, Mexicans, Columbians, Puerto Ricans or Saudi Arabians, etc could never have created the USA! Never!  You can see the same non-white end of Americas exceptionalism in "the squad."

I would say repeal the 1965 law, but the damage is already done. America's goose is cooked. Personally, I'll be looking for a different place to live, not torn apart by the nightmare of "diversity"--which is a disaster here and in Europe. 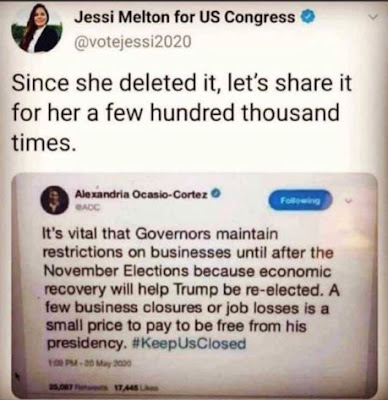 Unfortunately. this is what happens when a bartender with “some charisma” gets elected! She’s not too bright.... nor are her constituents!