Beware the Pharmaceutical-Industrial Complex: the Remdesivir vs HCQ Scam

There has been a systematic and worldwide effort to diminish or even demonize the use of Hydroxychloroquine to treat Covid-19 and promote Remdesivir instead, when all the scientific evidence points to very high efficacy of HCQ (plus Azithromycin and zinc sulfate) and just slight to moderate benefits for Gilead's Remdesivir.

A collection of studies on HCQ is found at c19study.com. I highly recommend that you scroll down the list of over 92 studies around the world that mostly show good to outstanding benefits using HCQ alone or with Azithromycin and/or Zinc.

The evidence is overwhelming. Trump was right all along. Trump often speculates but is often proven correct. I think that's why the entire world works against him by lying or otherwise trying to prove him wrong.

The following graphic shows positive results in nearly every case except for mixed results late treatment: 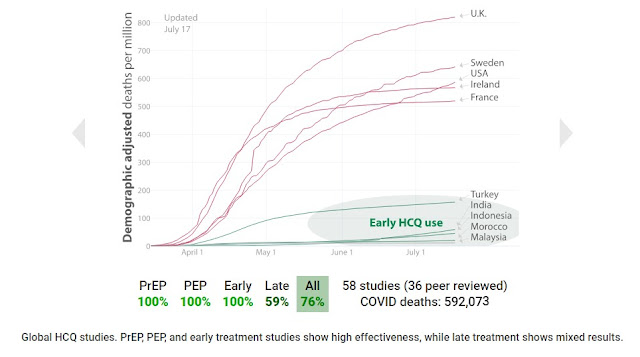 So, we see that nearly every study shows benefit for HCQ++, but the WHO advised against the use of HCQ in May 2020 based on ONE OF THE FEW STUDIES THAT SHOWED NEGLIGIBLE HCQ RESULTS by  Lancet. (you can find that study at Covid19.com).  But that Lancet study was panned by pathologists and it was later retracted due to obvious inaccuracies. In fact, it's the ONLY study that was retracted and can be found in the Covid19.com list on the 5/22 date.

The National Institute of Health (NIH) also discontinued it's study of HCQ use in late stage Covid case citing no observable benefits. This discontinuation made headlines but no study was ever published. That information is found on Covid19.com on "6/19, Negative, NIH."  Why no published results??

Something doesn't smell right at all. It smells fishy. It's as if the Pharmacuetical-Industrial complex wants to sell a high priced option to make $Billions by pooh-poohing the highly effectual and dirt cheap option??  Ya think??

Remember, HCQ has been around treating malaria for some 70 years and it's proven safe for use.  A course of treatment using HCQ++ is about $30 vs. $3200 for Remdesivir or $520 per dose.

II. The Case for Remdesivir


The Chinese abandoned Remdesivir in an April 2020 study using a fairly small sample of patients. Randomized placebo controlled study of Remdesivir in Covid19 finds NO clinical benefit of adding the drug.

Look at that viral load graph from upper and lower respiratory tract from that study: 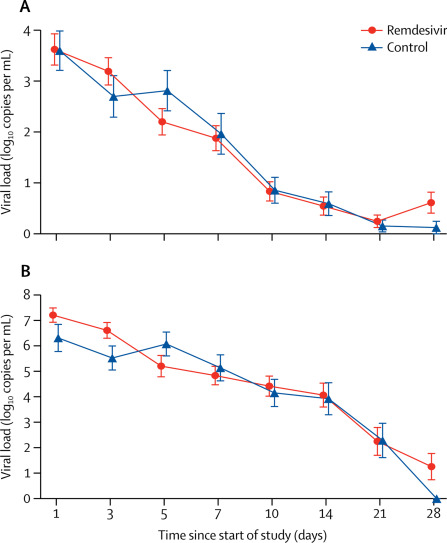 CNBC says on June 1, 2020 that one study shows some benefit at 5 weeks, but no statistically significant benefit at 10 weeks:

The odds of improvement in clinical status with the 10-day treatment course of remdesivir versus standard of care were also favorable, but not statistically significant, the company said."

From a Seeking Alpha article: "In the large and most important study so far conducted by the U.S. National Institute of Allergy and Infectious Diseases, 7.1% of hospitalized patients on Remdesivir died. That compared favorably with 11.9% of patients on a placebo."

All in all, Remdesivir is hardly a silver bullet, but it's more like a rubber bullet but priced as if it were a platinum bullet.

Even after only small improvements in mortality and hospital stays, Dr. Fauci and the FDA immediately made Remdesivir the "standard of care" on April 29th ignoring the large number (92 studies) of exceedingly positive HCQ results and it's very low cost. The "standard of care" announcement guarantees the expensive Remdesivir is used first across the nation.  The US government was immediately obligated to buy that drug at $3200 for a course of treatment.

It's almost as if Dr. Fauci, the FDA and the National Institute of Health were all influenced by big moneyed lobbyists or big-moneyed Pharmaceutical companies?  Also, maybe they were influenced by the prospect of under-the-table kickbacks, plus rocketing Gilead share prices to benefit all those people with Gilead shares to allow Gilead to make $Billions???   Who would have thunk it??

I don't know if you've been following Chris Martinsen at Peak Prosperity, but I have and I trust his information. He said:  "I’ll tell you what. If this is me, and I am me, and I end up getting this thing, I am going to want Zinc plus Hydroxychloroquine plus Azithromycin. I would want that treatment.” — Chris Martenson, PhD"

Ladies and gentlemen, this is a classic case of corruption, the influence of the pharmaceutical-industrial complex on the government and non-government organizations. The result is the needless death of thousands, if not hundreds of thousands of people worldwide who suffered from the Covid-19 virus and could have received the safe and readily available HCQ++.  And for what? For corruption, money, stupidity and to spite Trump (Trump derangement syndrome).
Posted by Doug at 9:12 AM