GOP in Charge In Washington and Especially In The States

The midterm elections gave the Republicans an impressive majority not only in the US Senate, the US House of Representatives but also in the States.  This doesn't surprise me a bit since Republicans are mostly principled conservatives and are generally fit to govern.

Due to the corrosive influence of Obama, Democrats have devolved to the "looney left" or "lunatic fringe." They are now the party of the irresponsible for the irresponsible.  Obama, a product of the liberal agenda, will destroy liberals.   The Democrats brief majority lasted only as long as they could hide their agenda from voters or for as long as they and the friendly media can spin their inevitable failures. I've seen this movie before and the failures become obvious to even the most oblivious voter.

Here's some stats showing just how extensive the GOP majority has progressed:
Obama, the very product of the Liberal agenda, is destroying the Democratic party -- a delicious irony.

Democrats have shifted remarkably left since JFK and Bill Clinton's administration and are unfit to govern.  The US is a center right country. See map below of US House party affiliation.

Some 24+ states are filing suit against Obama's Executive Order on Immigration.  It will take time for that suit to move forward, but already one Federal Judge has ruled that order unconstitutional.  This is just the beginning of another judicial spanking for the administration.

The case in front of the Pennsylvania judge Arthur Schwab was about a single deportation, but the judge considered the President's order with regard to the case under consideration.

From the Washington Times,


Judge Arthur J. Schwab, sitting in the Western District of Pennsylvania, said Mr. Obama has some discretion in how to enforce laws, but by setting out a comprehensive system to grant tentative legal status to as many as 5 million illegal immigrants, the president has strayed into trying to write the laws, which is a power reserved for Congress.

This is just the beginning.  Expect the Obama administration to be spanked yet again by the Courts for his unconstitutional actions. The suit by 24 States has just started.  Ignoring the Congress and announcing immigration rule changes that Obama admitted 22 times are not in his power is no way to act in our Constitutional republic.  Obama is a disgrace.
Posted by Doug at 11:23 AM No comments:

Obama today announced that he's starting to normalize diplomatic and trade relations with Castro's Cuba.   As a reminder, Cuba is a Socialist country hijacked by the Castro family and stuck in deep poverty.  It is stuck in poverty because of the ravages of Socialism and dictatorship!  Make no mistake about it.  Now that Obama is giving concessions to an octogenarian dictator in Cuba, he's actually reinforcing rule by that illegitimate regime.  The fact is that Socialism has to go, but it won't happen when you offer concessions to Socialist dictators.

Just how ravaged is Cuba by Socialism?  Doctors and nurses just got a big raise recently.  At the high end, doctors with two specialties will see their salary go from the equivalent of $26 a month to $67, while an entry-level nurse will make $25, up from $13!  This shows that Cuba must be the poorest country on earth.

You see the ongoing pattern here?

Obama hates Netanyahu, but loves Iran's Rouhani,   He hates Britain but loved Putin's Russia, He sided with Chavista Manual Zelaya who was ousted by Honduras's Supreme Court when he tried to pull off a Chavez-style power grab.  He sides with illegal aliens and is against enforcing existing laws. Can you see the pattern?   He's on the wrong side every time.

And he never demands much for his concessions -- making Obama the worst negotiator in the world! For example, the centrally planned dictatorship persists in Cuba while Obama gives them huge financial gains. There is no demand to enact true democracy or to end totalitarian dictatorship.  Similarly, in his first weeks in office, Obama screwed-over Poland and the Czech Republic by cancelling missile batteries for these countries in return for NOTHING from Putin.   I'll bet that those countries had those missiles now!

Obama himself is a lawbreaker and wannabe tyrant.  He wants to be a tyrant himself by ignoring Congress (and our Constitutional system of government) and acting alone.  He's vowed to ignore the mid-term voters who "spoke" just a few weeks ago.   He's ignored his pledge to faithfully execute his duties of office which is enforcing our country's laws.  You could say that the US is slipping into tyranny just because of the color of Obama's skin.

Remember when Obama refused to support Iranian students who were protesting their theocratic regime in Iran in 2009?   Not a peep from the "leader of the free world."  Now, the administration is racing to make a "deal" -- any deal -- with the terror-sponsoring Mullahs in Tehran while evidence is mounting that Iran is already cheating on even the preliminary agreements.  These people haven't been trustworthy for 40 years. They ALWAYS cheat and bide time by tricking any US administration.

Obama showed his instinct to side with ne'er do wells when he inappropriately sided with Michael Brown in Ferguson.  Brown was a proven thug.  As I've said, Obama never learns anything!  He said the police officer in Cambridge had acted "silly" when he didn't know what he was talking about.

The Obama Administration refused to stand against Argentina in their renewed claims on the Falklands recently.  Oh, and don't forget that Obama happily hosted a bunch of African tyrants, oppressors and homo-phobes in a "monster's ball" at the White House in recent months.

The Obama administration by announcing he'll not enforce immigration law has created a refugee crisis at our southern border bringing chaos to border states.  And by accepting illegal immigrant children and uniting them with illegal families residing in the US is, in essence, completing delivery of many children for the Drug Cartels. You see, the Mexican drug cartels have been trafficking children into the US for money.   So, Obama is on the side of the drug cartels whether he realizes it or not.

America is sliding into tyranny all because of Obama's skin color.  He really should be removed from office.
Posted by Doug at 10:04 AM No comments:

Why Oil Prices Are Dropping

Oil prices have declined some 50% in the past few weeks after OPEC made it clear that they will continue to produce at current rates despite the market being oversupplied.  Some OPEC ministers have even said that $40 per barrel oil might be tolerated.

This tolerance for dramatically lower oil prices is not unprecedented.  Oil prices declined to $11 per barrel in 1986, led by Saudi Arabia increasing their output.  This was intended to counter and reduce the pace of North Sea oil developments.  This time, Saudi Arabia is trying to counter the US shale oil success story which has added 1 million barrels per day for each of the last three years.   I also think that there is some credence to the idea that Saudi Arabia and the US have colluded to punish Russia for their military action in the Ukraine.  And it's working!  Russia's currency is collapsing despite 17% interest rates.  A full-fledged crisis in Russia is brewing.

Here's a chart showing the rise of US oil production in recent years: 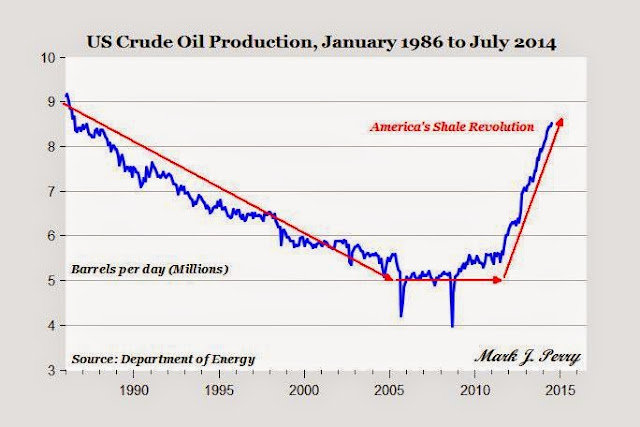 Production in the US is on track to reach 9 million barrels per day by the end of 2014.

The Supply and Demand Picture for Oil


Increasing demand causes oil prices to rise, which in turn stimulates additional supplies.  This process is shown in the following graph showing what happened during the period 2004 to 2008 when oil hit $140 per barrel. Demand rose and prices rose sharply: 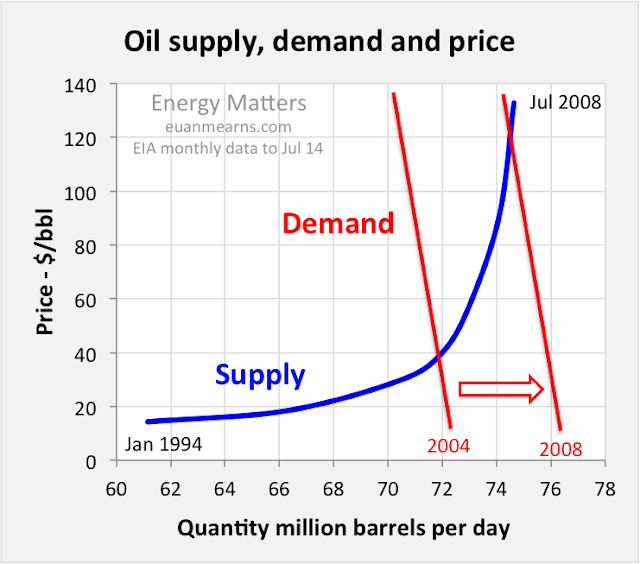 For prices to go back up, demand has to increase and/or supply must contract.  Oil prices of $50 will crimp marginal shale oil production and Canadian oil sand growth but absolute drops of production volumes will occur but will be slow to materialize.  Lower oil prices will marginally stimulate demand in the short and long term.  If the world goes into recession, then demand and prices will fall further.
Posted by Doug at 3:56 PM No comments: