Government, especially when you include the supposedly independent Federal Reserve, is the source of all of our big problems.  Our leviathan State is failing at everything and is slowly bankrupting this country. Nothing is working. Despite overwhelming evidence of massive failure, both political parties support and permit even more "government!" Bigger government is the central platform of the Democratic Party (and the unstated central platform of the Republican party)! Our "social contract" with the government is broken.

We now live in a heavy-handed surveillance state with weaponized police departments and Federal agencies. Everything coming from the government is wrong or outright lies including:
I've suggested that the US is already a failed state. We're a dead country walking and crisis is coming. I've suggested that we need a massive reset or revolution that requires the government to fail and go broke in order to allow prices to deflate so that people can afford to live.

For example, look at the chart below.  Note that prices of everything that is manipulated by "government" (red) is rising un-sustainably. Also note that prices subject to true market forces (blue) have been coming down. 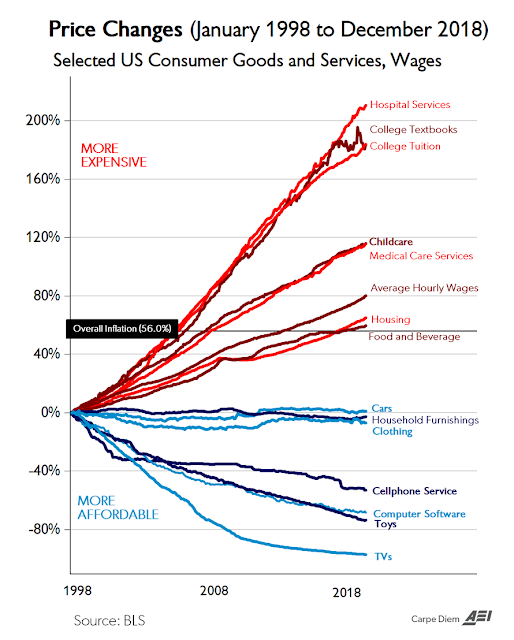 The greater (lower) the degree of government involvement in the provision of a good or service the greater (lower) the price increases (decreases) over time, e.g., hospital and medical costs, college tuition, childcare with both large degrees of government funding/regulation and large price increases vs. software, electronics, toys, cars and clothing with both relatively less government funding/regulation and falling prices.

Conclusion: remind me why socialism is so great again? And when everything falls apart and truly fails, The Left will assert, as it always does, that Big Govt is NOT the problem, it was just that we didn't have the right people in charge. Those that never learn are, unintentionally or not, evil.
Posted by Doug at 11:31 AM 4 comments: