The Worst Chart In The World 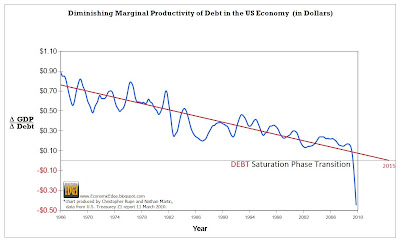 Looking at the above chart, you can see that "Keynesian" spending "firepower" is continuing to drop.   We live in a time where Nobel Prize winners are big disappointments.  For instance, Paul Krugman (and fellow Leftists) continue to advocate more and even massive government spending to combat the slack economy.  For ordinary citizens without PhDs, it's obvious that something has changed and, as a country, we're not getting any "bang for the buck" from government deficit spending.

Now for more evidence that this trend continues but above the red trend line drawn above.  Take a look at the following chart showing vastly diminished returns for government (public) debt creation.  For the first quarter of this year, US government debt increases $359 billion for a measly $142 billion in GDP rise.  That works out to about $0.30 when you calculate Change in GDP/Change in Debt.

Please, someone stop the madness!
Posted by Doug at 11:53 AM No comments:

Do you mind if I brag a bit?

Here's a list of a number of notable things that I've seen or done:

What's on my bucket list??
What's your dream?  Let me know.

While this administration hasn't proposed a serious budget in 1000 days and there is not one in sight, any attempt to bring sanity to our nation's fiscal nightmare is derided as irresponsible or worse!  The President has excoriated Paul Ryan's serious plan to tame entitlements and reduce deficits.   Meanwhile, not a finger is raised in the White House to come up with any new ideas.

As usual, the President or the Democrats don't have a plan. The plan is more of the same, kick the can down the road and criticize anyone in the opposition for trying to fill a vacuum of leadership.

If you can't budget, you can't lead!  A 'fluffy' budget proposal from the White House was defeated 97-0 recently in the Democratically controlled Senate and a previous year's "fluff-bomb" was defeated almost unanimously last year in the House.

I hate it when the President and other politicians called a reduced increase a "cut". Take the House GOP budget plan. It increases federal outlays from roughly $3.6 trillion this year to nearly $4.9 trillion in 2022. In the AP speech the president called this a "cut" because he wants to increase spending to $5.8 trillion in 2022.     Oh, and by the way, Government Spending is rarely "Investment."

....So we hear from the president that the GOP favors creating a “you’re-on-your-own economy,” wants to “end Medicare as we know it,” seeks to revert to “social Darwinism,” and plans to eviscerate the social safety net to pay for a tax cut for the rich.   None of this is true. No matter. The president has decided that the only path to electoral victory is to become attack-dog-in-chief.

But what about the actual substance? Is there anything at all to what the president is saying?

The president is attempting to argue in these speeches is that the keys to higher economic growth in the United States are higher marginal tax rates on the successful, no reforms to entitlement programs, and more government spending on selected “investments.” To say that this is a pathetic plan for growth would be to give it too much credit.

Medicare may indeed "end as we know it" if we do nothing.  The President's sole idea for budget reform is the wimpy, trivial and ineffective "Buffet Rule" which failed a vote in the Senate this week; perhaps because it would raise just $5 billion in taxes each year when the deficit is $1,300 billion per year!    Trivial!

How dare Obama claim that he deserves a 2nd term!
Posted by Doug at 7:54 PM No comments:

A Real Energy Plan for America....

Here's a real energy plan for America given that we have a growing surplus of shale natural gas:
There you have it. The above steps, without any credit for most of the offshore east and west coasts, could mean a gain of 4 million barrels of day of oil production, then a saving of 4 to 5 million barrel per day by using domestic natural gas for a substantial reduction of our oil imports from 14 million to less than 6 million barrel per day (of which 2 million bpd can come from Canada).

Now that's an energy policy!  If America can put a man on the moon in 10 years, then we could do this!   The only thing missing is leadership and faith in America like John F. Kennedy.   Obama has neither faith nor leadership.
Posted by Doug at 9:06 AM No comments:


The political left wing is angry these days...even 'screeching angry.'   The President is lashing out at the Supreme Court and saying incredibly stupid things doing it.   ObamaCare took an astonishing "shellacking" in oral arguments at the Supreme Court last week--so thoroughly was the case defeated in the arguments.  The left is thoroughly shocked!   Maureen Dowd, from the crumbling leftist bastion at the New York Times, called the Supremes "hacks in black robes."   Nice.

It's not just the Supreme Court that doesn't like it.  The polls continue to show public dislike for ObamaCare.   How can that be???   And those pesky Republicans are so wrong about trying to reduce the deficit and slow down the massive power grab by the EPA, Environmentalists and Federal government!  Paul Ryan is evil!  How dare they challenge us because we're so right!   Republicans only love the rich!

The economy is not doing what it's supposed (or promised) to do.  Green jobs are nearly non-existent.  Iran and Russia didn't do what they were supposed to do.   And according to the President, any business NOT in the green energy business is evil.    Taxes must be raised!    There is no tax that the President doesn't love.   It's that and bashing the only success story in the economy, the conventional hydrocarbon energy business, are the President's total scope of vision.    Oh, and government spending must never be cut!

With reality intruding on their world views, the left is sharpening their attack.    Gone is hope and change replaced by attacks and class warfare.  Barack Obama and the Left's entire world view is shattering before their very eyes and it's making them angry.

The problem is that reality is against the Left's views.  America is a politically center-right country.   Although the electorate was wooed (fooled) by rhetoric in the last election to try "hope and change," America is, and always has been, a fundamentally conservative country.   And, after a disastrous experiment with Obama, conservatives are going to take back both houses of Congress and probably the Presidency at the election polls this November.

Expect even more screaming and gnashing of teeth on the left this November.

The President (and the political left) is wrong about nearly everything. They haven't learned the greatest and loudest lessons of the 20th and even louder lessons of the new 21st century.  Rarely has history spoken louder than about the failure of central planning, bloated national governments, government intervention, and statism leading to waste, corruption,  high taxation and economic stagnation if not curbed.
Posted by Doug at 8:58 PM No comments:

Why the Left is Wrong


Republicans have a long way to go to restore their image as effective gov't and budget administrators and as free-marketeers and they need to forget all the emphasis on socially conservative issues.
Posted by Doug at 8:33 PM No comments:

Gov't Healthcare Takeover Will Not Succeed

Scott Rasmussen, the Republican Pollster, has written a nice article on why, even if the Supreme Court upholds the constitutionality of ObamaCare, the law will fail because it's basically against fundamental freedoms that Americans demand.  Read on.

But even if the law survives the Supreme Court and the next election, the clock will be ticking. Recent estimates suggest that the law would cause 11 million people to lose their employer-provided insurance and be forced onto a government-backed insurance plan. That's a problem because 77 percent of those who now have insurance rate their current coverage as good or excellent. Only 3 percent rate their coverage as poor. For most of the 11 million forced to change their insurance coverage then, it will be received as bad news and create a pool of vocally unhappy voters.

Additionally, the cost estimates for funding the program are likely to keep going up. Eighty-one percent of voters expect it to cost more than projected, and recent Congressional Budget Office estimates indicate voters are probably right. But it's not the narrow specifics and cost estimates that guarantee the ultimate demise of the president's health care plan. It's the fact that the law runs contrary to basic American values and perceptions.

This, then, is the third hurdle the law faces: Individual Americans recognize that they have more power as consumers than they do as voters. Their choices in a free market give them more control over the economic world than choosing one politician or another.

Seventy-six percent think they should have the right to choose between expensive insurance plans with low deductibles and low-cost plans with higher deductibles. A similar majority believes everyone should be allowed to choose between expensive plans that cover just about every imaginable medical procedure and lower-cost plans that cover a smaller number of procedures. All such choices would be banned under the current health care law.

Americans want to be empowered as health care consumers. Eighty-two percent believe that if an employer pays for health insurance, the worker should be able to use that money and select an insurance product that meets his or her individual needs. If the plan they select costs less than the company plan, most believe the worker should get to keep the change.

It's not just the idea of making the choice that drives these numbers, it's the belief held by most Americans that competition will do more than government regulation to reduce the cost of health care. For something as fundamental as medical care, government policy must be consistent with deeply held American values.


Congress should instead have taken measures to reduce medical costs including the ideas listed in my recent blog on Ideas to Reduce Medical Costs.  If Congress wanted to expand Medicaid for low income citizens, that option would have made more sense (ignoring our nation's fiscal condition).  By the way, many people that are eligible for Medicaid don't know/use it.
Posted by Doug at 4:08 PM No comments: