The following is a good article on how the US headed to 3rd World country status if there are not fundamental reforms.    Have a look at  How the United States Will Become a 3rd World Country by Ron Hera at Hera Research LLC and published in www.marketoracle.co.uk

The United States increasingly resembles a 3rd world country in terms of unemployment, lack of economic opportunity, falling wages, growing poverty and concentration of wealth, government debt, corporate influence over government and weakening rule of law.  Federal Reserve monetary policies and federal government economic, regulatory and tax policies seem to favor the largest banks and corporations over the interests of small businesses or of the general population.  The potential elimination of the middle class could reshape the socioeconomic strata of American society in the image of a 3rd world country.  It seems only a matter of time before the devolution of the becomes more visible.  As the economy continues to decline, public health, nutrition and education, as well as the country’s infrastructure, will visibly deteriorate.  There is little evidence of political will or leadership for fundamental reforms.  All other things being equal, the will become a post industrial neo-3rd-world country by 2032.


Nothing is etched in stone, but when a nation runs a $600,000,000,000 dollar trade deficit year after year, it transfers that amount of wealth to China, Korea, Oil Producing Countries, etc EACH YEAR.  Those other parties except paper notes (IOUs) in exchange for real goods until there is a loss of confidence in those promissory notes.  When that happens, there may be a rapid loss of purchasing power as the dollar drops and inflation rises.  The slide to 3rd World Status will be relatively quick on historical timeframe.

Four more years of gridlock in Washington might cause this loss of confidence.  Obama, true to his African ancestry, will continue to act (or, more importantly, to not act) to help the descent into 3rd World status.  That's why my blogs Washington's Anti-Energy Policy, A Real Energy Plan For America, US Govt Policies Are Not Working and Washington is Corrupt All the Way to the Top  are relevant to reversing trade deficits, reversing counter-productive government policies and improving some sort of "rule of law" in this country.


Charles Biderman, with TrimTabs, nicely summarizes in under 4 minutes how we (and Europe) got to where we are today with 30 years of perspective.

While the President drifts off onto another relatively irrelevant topic of gay marriage, the real issues of the day are ignored.

There's never been an administration with any real national energy plan in my lifetime.  The difference today is that there's real potential to improve our trade balance and energy security with the shale oil and gas boom increasing domestic production on private lands (land under Federal jurisdiction has seen a decline in production due to slower permitting and the overreaching drilling ban after the BP disaster).

So, why the Congress and President dither on irrelevant issues, some people have serious ideas for substantial improvements in our energy security and trade balance.  See my A Real Energy Plan For America.

In an May 10th interview with CNBC, T. Boone Pickens says that he is finished with Washington and national politicians.  He's not finished with business but finished with Washington. He said "that they don't care about energy independence." Pickens has been trying to cajole and promote a plan to the President and Congress to convert the nation's trucking fleet to natural gas and displace as much as 2 million barrels per day of oil with new found shale gas.   His goal is improve the country's national security by reducing our reliance on imported oil.   Saying of Washington, "the whole deal is designed to fail."

I don't how Boone Pickens was to benefit or profit from his negotiation with Washington politicians as the shale oil and gas boom goes on despite Washington.

There has never been any energy plan in my lifetime, but with the hydrocarbon adverse, hand-wringers in Washington, we now have an anti-energy plan with this administration.
Posted by Doug at 8:35 PM No comments:

Washington Is Corrupt All The Way To The Top

We've heard Obama and the administration were going to go after the bad actors on Wall Street back in the "bail-out" days of 2009.   But why are there no prosecutions?  No one is in jail.  The SEC remains completely asleep at the wheel and Eric Holder's department of justice prosecutions of fraud and securities violations are at a 20 year low.

Well, it turns out that Obama's talk is just  rhetoric:  hypocritical and cynical politics---Chicago style.

From Breitbart.com's "Justice for Sale at Holder's DOJ"

Holder and Obama’s anti-Wall Street “law and order” rhetoric has turned out to be a smokescreen that allows the Obama campaign to talk the talk of the 99% while taking money from Wall Street’s 1%.  The result is extortion by proxy.  As President Obama put it to the Big Finance executives who met with him at the White House just two months into his presidency, “My Administration is the only thing between you and the pitchforks.”

Not surprisingly, of the elite bundlers who made up Obama’s 2008 campaign, the second most represented industry after law was the securities and investment industry.  It’s a level of hypocrisy that has outraged even committed leftists.  Industrial Areas Foundation activist Mike Gecan put it squarely: “I’m from Chicago, I’ve seen this game played my whole life."

So what have the securities and banking industries received for their political contributions?

As Boyer and Schweizer report entitled "Why can't Obama Bring Wall Street to Justice?", Department of Justice criminal prosecutions are at 20-year lows for corporate securities and bank fraud.  And while large financial institutions have faced civil prosecution, those typically end in settlement fees with the major banks that represent a fraction of their profits, often paid through special taxes on mortgage-backed securities.

It’s the most crass and cynical brand of politics imaginable, the Chicago Way writ large: pay to play justice from the nation’s highest law enforcement official.

Washington is, in part, in the hands of Chicago mobsters.
Posted by Doug at 3:39 AM No comments:

Paul Krugman is on a rant these days; raging about how "austerity" is causing all of the problems in Europe.  But there is scant evidence of any spending cuts at all.   Here's a chart below (click to enlarge) that shows that spending has been increasing in nearly every country.  Only Greece, Spain, Italy (and slightly in Ireland) is where there is some actual drop in spending but only reversing some large prior increases--all are only reduced back to 2008 levels (2007 for Greece).

You've heard about all the austerity in Britain.  Forget it, spending is increasing.  Hat tip to Brian Doherty at Reason for the chart reference.

Francois Hollande just won an election in France denouncing "austerity" but you can see from the chart below that French government spending is up, up and away.  No austerity in sight.  What opium is the French population smoking??   There is a price to be paid however.  French Government bond yields are now over 1.8 percentage points greater than German bonds (3.4% ten year French yield vs. 1.6% ten year German yield).

There is certainly no austerity in the US either.  Obama is lambasts reduced INCREASES in spending as "cuts" in govt spending.  The "Ryan budget" increases federal outlays from roughly $3.6 trillion this year to nearly $4.9 trillion in 2022.  But Obama called this a "cut" because he wants to increase spending to $5.8 trillion in 2022.  He has called Ryan's attempt at sanity a "radical right wing" tactic and "social Darwinism".   Do you think it's campaign season?   If American's buy this, then they deserve what they get. 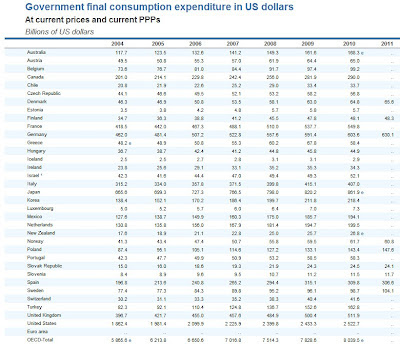 That said, my point is that we live in a time, where in political circles,  reductions of spending increases are lambasted as "cuts".   Nonsense!   Basically politicians never actually cut spending until horrific crises intrude.

Crises are coming as sure as the sun rises in the East.

The US Gov't Economic Policies Are Not Working

Did you ever notice that Bernanke keeps citing the Great Depression of the 1930s for his lessons in the current environment?    But the government of FDR never did get the nation out of the depression--until all-out wartime spending in 1941.

From a great article by Jim Grant, called "A Piece Of My Mind," Jim asks why don't we look at the depression of 1920-21 under President Harding instead?


If Chairman Bernanke were in the room, I would respectfully ask him why this persistent harking back to the Great Depression? It is one cyclical episode, but there are many others.

I myself draw more instruction from the depression of 1920-21, a slump as ugly and steep in its way as that of 1929-33, but with the simple and interesting difference that it ended. Top to bottom, spring 1920 to summer 1921, nominal GDP fell by 23.9%, wholesale prices by 40.8% and the CPI by 8.3%. Unemployment, as it was inexactly measured, topped out at about 14% from a pre-bust low of as little as 2%. And how did the administration of Warren G. Harding meet this macroeconomic calamity? Why, it balanced the budget, the president declaring in 1921, as the economy seemed to be falling apart, "There is not a menace in the world today like that of growing public indebtedness and mounting public expenditures." And the fledgling Fed, face to face with its first big slump, what did it do? Why, it tightened, pushing up short rates in mid-depression to as high as 8.13% from a business cycle peak of 6%. It was the one and only time in the history of this institution that money rates at the trough of a cycle were higher than rates at the peak, according to Allan Meltzer.

But then something wonderful happened: Markets cleared, and a vibrant recovery began. There were plenty of bankruptcies and no few brickbats launched in the direction of the governor of the New York Fed, Benjamin Strong, for the deflation that cut an especially wide and devastating swath through the American farm economy. But in 1922, the first full year of recovery, the Fed's index of industrial production leapt by 27.3%. By 1923, the unemployment rate was back to 3.2%. The 1920s began to roar.

If you object to using the template of 1920-21 as a guide to 21st-century policy because, well, 1920 was a long time ago, I reply that 1929 was a long time ago, too. And if you persist in objecting because the lessons to be derived from the Harding depression are unthinkably at odds with the lessons so familiarly mined from the Hoover and Roosevelt depression, I reply that Harding's approach worked. The price mechanism is truer and enterprise hardier than the promoters of radical 21st-century intervention seem prepared to acknowledge.

In notable contrast to the Harding method, today's policies seem not to be working. We legislate and regulate and intervene, but still the patient languishes. It's a worldwide failure of the institutions of money and credit.

I'd like to see Jim Grant as the next Chairman of the Federal Reserve.

What would he do? He would begin to normalize interest rates, argue to make the Fed's sole mandate to maintain price stability (remove the full employment mandate) and study the re-establishment of a modern day gold standard.
Posted by Doug at 5:05 AM No comments: