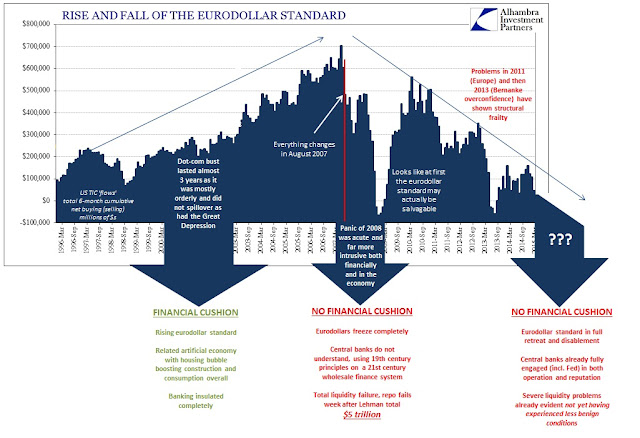 Until this problem in money markets is recognized, the economic damage continues to accumulate for a longer and longer period of time.  Already, the decay of the world economy is now 2 years in duration. Money markets are now in turmoil due to decreasing liquidity and monetary "tightness." LIBOR rates are rising indicating tightness in wholesale money markets for the banks. Falling liquidity is likely to seriously affect stock and bond markets too. There have already been steep stock market liquidation periods like we saw in August 2015.  Expect more economic pain and market turmoil in the very near future.
Posted by Doug at 9:18 AM No comments:

12 Step Program to F*ck-up Your Country

Obama and Hillary's foreign policy legacy is a near-perfect record of failures, flops and destruction followed by lies, deception and spin. Then those lies and spin are dutifully and faithfully broadcast by a totally Leftist and administration-compliant media.  Hitler and Goebbels would be proud.

Most people can see that Bush made a huge error in deposing Saddam Hussein as it made a bad situation infinitely worse. But the Obama administration, including Hillary, has been at least 3 times worse! They wanted to depose Assad. That was the US stated policy. Then, they quickly got behind the ousters of Qaddafi in Libya and Mubarak in Egypt when unrest gripped the Middle East.

In Egypt, their installation of Obama's "friends," the horrible Muslim Brotherhood, brought down another Islamic iron fist rule to the country turning it once again into a totalitarian state. A year later, more Egyptians died in a 2nd revolution to overthrow Obama's buddies. The entire episode is a catastrophe of massive proportions.

Speaking of catastrophe, Hillary and Obama's "adventures" in Syria are titanic failures of historic proportions. Their red line to no line idiocy ended up giving Russia and Assad a permanent alliance, assured Assad's survival and vastly increased Russian influence in the region. Meanwhile 10s of thousands MORE people are being bombed and decimated by Russia-backed Assad. Good job Hillary/Obama! Putin is much more clever than the intellectually deficient Obama administration.

Hillary and Obama's hasty departure from Iraq, with no residual force, set the stage for the disastrous rise of ISIS in the region. Libya is now a haven for ISIS too thanks to Hillary/Obama. Yes, the administration wasn't really in control of events in the region but America's positions, actions and inactions did nothing but worsen each and every situation.  Obama and Hillary have been lying for years now claiming that they have a strategy in fighting ISIS. But they have no strategy despite constant assurances to the contrary. Their real strategy is to stonewall and lie to get past the next election.

As a result, Russia and Iran control the Middle East with our traditional ally Saudi Arabia somewhat sidelined. The entire balance of power in that region has been overturned by the extreme ignorance and incompetence of Hillary and Obama. America itself is now sidelined in that region since no one can trust us. We're talking about the most misguided foreign policy fiasco in world history.

News this morning details more lies and subterfuge by Hillary and Obama with regard to the "Iran deal." Almost everything in the Iran deal turns out to be dubious and/or deceptive in effect and implementation -- with Obama and Hillary lying about nearly all of it. It appears that the Obama administration was desperate for any agreement, even if it was bad for America. Every objection on the Iranian side was accommodated. Repeated reports, slowly leaked out since it's conclusion have shown that there are secret side deals with Iran that helped Iran and undermined the intent of the "public"deal!  And there have been plenty of factual reports of Iran repeatedly flaunting the terms of the "agreement."The whole episode stinks to high heaven. To even think that you could trust the Mullahs is a delusion on a massive scale. Obama and Hillary are severely deluded and the Iran deal is fraud meant to impersonate some kind, any kind, of policy success. And we were given a false narrative by our propagandist-in-chief that it was either a deal or war with Iran. That's completely false! And the Media spins these lies!

Remember Hillary and Obama trying to kick-off a Palestinian and Israeli negotiation? Obama and Hillary's proposal STARTED with the assumption that Israel will be giving up territory. Enticing Israel to discussions where the end-result was predetermined was an obvious FAIL!  Nothing happened of course.

And Liberals never understand the concept of peace through strength and have seriously degraded our military for 8 years now. This is one more reason why Liberals are unfit to govern. Not only are they unfit, they can only impose their policies by tricks and lies.

Hillary, Obama, Kerry and nearly all the rest are fools and dunces of the highest magnitude. That they occupy the highest offices in the land is astounding and dangerous. If Hillary fools the people and wins the Presidency, it will probably be the ultimate catastrophe for our country. America may never be able to recover.
Posted by Doug at 10:54 AM 1 comment: