The Student Loan Racket In Action

The Atlanta Journal Constitution recently reported that 43% of student loans are not being repaid. But, despite this, the Federal Government keeps making (or guaranteeing) more and more of them. Total student loans outstanding has quadrupled in a decade to over $1.2 Trillion.  And our wonderful and wise government is making even more of them at very low interest rates!  College loans are one of the few and largest "assets" of the US government. But default's are rising fast. What's going on here?

Congress knows there is huge problem and refusing to do anything about it. Their plan is to eventually bail-out these "students" and put $100s of billions of debt onto the taxpayers shoulders!  They don't care!  Trump is right, the system is rotten and people in Government are very, very stupid.

Student loans surged especially after 2009.  The government is providing these loans as a welfare program to placate young people where there are few jobs or other opportunities available for them. (There are few jobs for them because of the destruction caused by the Government!!)

It's a huge racket for schools in general and for-profit schools in particular. All of the Federal money flooding their way is enabling even more lobbying efforts to keep the money coming!  But "students" are racking up debt where much will never be repaid -- witness that 43% are not being paid now and outright defaults are already north of 13%..

The result has been that government and government-backed money are inflating college tuition just like government spending (and govt loans) are inflating medical (and housing prices). College (and housing) is now un-affordable for this and the next generation without huge expenditures or huge debt.  Heaven forbid if interest rates ever rose to "normal" levels of 4 or 5% or so.  The "system" would collapse.

Now, 43% of Loans Are Not Being Paid back...and probably never will. 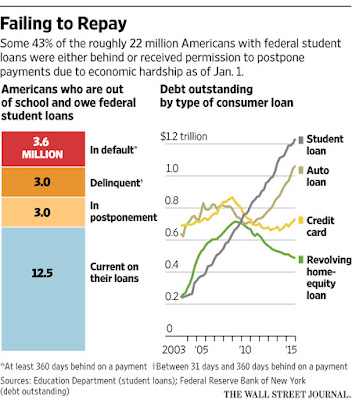 
I live on an urban block with Condos and apartments about a 1/2 mile away from an Art Institute school.  Art Institute rents nearby apartments and re-leases them to their students so that they can walk to school.  I often see the students walk to and from school.  The vast majority of them are black and many are obviously gay.

Here's what is going on. These kids are getting students loans either from the Federal Government (most likely) or from other institutions whose loans are "guaranteed" by the Feds.

The problem is that very few of these kids will get jobs even if they finish. If they get jobs, it's unlikely that they will earn enough to live AND pay back their loans. Many won't finish at all. Bottom line: most of these loans won't be paid back. Stats support this.

With all the defaults coming in this loan category, you can be confident that taxpayers will be on the hook when Congress bails out these students at taxpayer's expense. But Congress is CAUSING this problem and the plan all along is to put the burden on US taxpayers.

The interesting thing is that black students of primarily black schools are leading the list of schools where students are failing to ever repay even a single $1 of their loans.