Only 3% of the population is gay according to Gallup and a fairly small minority (15 to 20%?)  of this minority will get married.   So, we're talking about quite a small group of people when we are talking about gay marriage, or maybe 0.5% of the people.  Because of the small numbers, it's not credible that those unions or marriages is any "threat" to the majority as some claim.

The political process to legalize gay marriage has taken decades to evolve and some 37 States have enacted legislation to legalize unions or marriage. Given more time, the rest of the States would come to some accommodation, one way or another, with the issue through the political process. Here's a good map of the current situation in the USA. 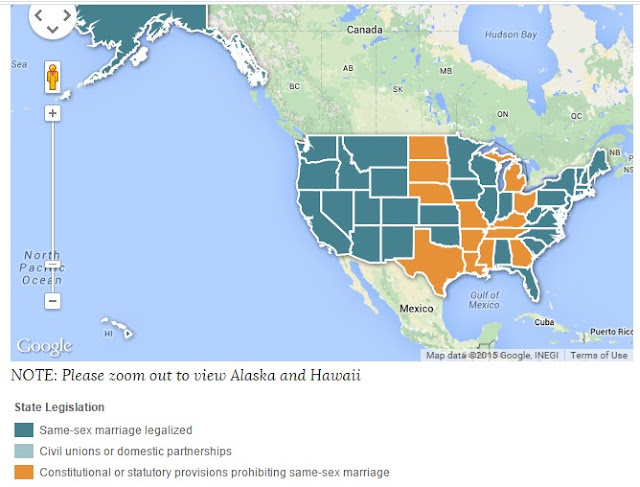 The People make the laws in this country. The Supreme Court merely interprets it. The Supreme Court action this week used legal gymnastics to basically make a new law and force it's opinion onto the 13 States that have not approved such statues, or who are still working through the issue. There is a smelly scent of Judicial activism.  Some States may never have any gay unions or marriages, but that's for the people in that State to decide.   Gay persons might elect to live or move to a State that has approved it, although it's true that might be inconvenient. But in this recent ruling, the Supreme Court subverted all of the political and legal processes underway. This is where I take issue.

Parts of the Constitution and Bill of Rights are written to protect minorities from the "tyranny" of the majority. This is a unique concept in the history of the world. It's huge!  But, in a way, the concept is now turned on it's head with the subject of gay marriage. The endangered minority suddenly are Catholics or Protestants who have a different view of marriage than the Court.  So, priests are now to perform such marriages against their religious views??   I think they can still do what they want since there are explicit protections for freedom of religion.  If you have a business and refuse to  bake a cake for a gay wedding, can you be prosecuted?  Maybe.  Who is going to protect the rights of this new minority?? Those opposed to gay marriage have now been disenfranchised and subjected to the tyranny of the majority in a way.

The Court used the 14th amendment which, at first glance, has all the right words to support ANY cause that you might want to support. Here is Section 1 (of 5 sections) from Cornell Law School:

But the 14th amendment was written to deny discrimination for blacks in the post Civil War Reconstruction era in 1868.  That's what it was about. The 14th Amendment was CERTAINLY never intended to protect persons with a sexual or gender preference. Nor did it address and permit same-sex marriage!!  But it's vague words fit anyone. Whose not in favor of life, liberty or property?? This, and the equal protection clause, are the loopholes that the Supreme Court used.  It's a bit of a gimmick and subverts the long political process long underway in these issues.


The 14th Amendment didn't protect the freed slaves. Federal enforcement receded and all of freedoms won in the Civil War were lost.  Blacks had to wait 100 years for real protection under the Civil Rights Act.  For this reason, it's extremely ironic that US Blacks today put all of their trust in the Federal Government when it's the government (and the Democratic party) that let them down for 100 years!  The Civil Rights Act more explicitly granted rights to prevent States to discriminate on the basis of race, color, sex, or ethnic origin.  That law worked.  And don't think for a moment that "sexual orientation" was not considered for inclusion in the Civil Rights Act protecting minorities.  It was considered and not put in.  Why?  Because The People would not approve it.

These enumerated protected minorities have differences that are innate from birth-- race, ethnicity and sex -- are qualities that you're born with. So, for the Court to conclude on it's own that "Gay" is genetic is a stretch. They don't know and I don't know for sure.   The court is protecting a group with psychological and adjustment issues.

The same-sex sexual preferences and 'opposite' gender identifications are formed through unusual family circumstances that results is a psychological "adjustment" where their basic sexual identity becomes the opposite of most.

All boys, even at 2 years old have an attachment, even sexual attachment, to the mother.  It's the "job" of the father to assert his place in the family structure and displace the son, claim the mother and to put the boy "in his place." If that doesn't happen, due to an absent or weak father, the son continues to "possess" the mother which overwhelms the boy with guilt. The boy identifies with the mother in gender at a basic level due to the weak/absent father.  All gay men have a basic feminine identification.  Gay women have a masculine identification.

What is supposed to happen is for the boy to be displaced by the dad, where the boy knows his place and is then is unencumbered by guilt and finally identifies with the father (and his gender).   This is Freud's Oedipus complex "process."  And it feels like it's genetic because it happens at 2 or 3 years old.   It is nearly impossible to change this adjustment since it's so deep-seated.    So it feels like some immutable aspect, but is in fact an "adjustment" to an abnormal childhood.

I use the term abnormal childhood upbringing.  With this, there are many other psychological problems for gay people and there is often alcoholism, drug use, anxieties, addictions including sex addiction and OCD issues to name a few.  Gay people blame it on persecution which is partly true.  But there are deep "disturbances" in the mental health of gay boys and girls.  In short, the psychological health of gay people is troubled -- very troubled.  And that is obvious to most of the population.  That is not meant to be a condemnation in any way, just stating the situation.  And it's very wrong to add insult to injury by persecuting gay people with discrimination.

Given the psychological genesis of gender identification above, it's not clear how children can find their own sexual identity in a same-sex household.  For example, if two men raise a girl, how does the girl find her own sexual identity given the two males in the home?  How this turns out is not completely known yet and argues for a go-slow approach that was underway before the Supreme Court intervened.

"Gay" is not likely to be genetic --but it feels like that for gays.  And for the court to decide that "Gay" is somehow an innate quality to be protected, and then re-define marriage to include same-sex marriages when there's a 5000 year human history, and 200 years US history of solely defining marriage as between a man and a woman is a very big, big stretch.  It's better left to the States to define this and whether to extend it to gay persons.

It seems to me that the correct approach was to let the political process continue and/or amend the Civil Rights Act or through a Constitutional amendment, NOT THROUGH JUDICIAL DICTATE. The People make the Laws NOT the COURT.  My argument here is more about process, not against gay persons.
Posted by Doug at 11:03 AM No comments: 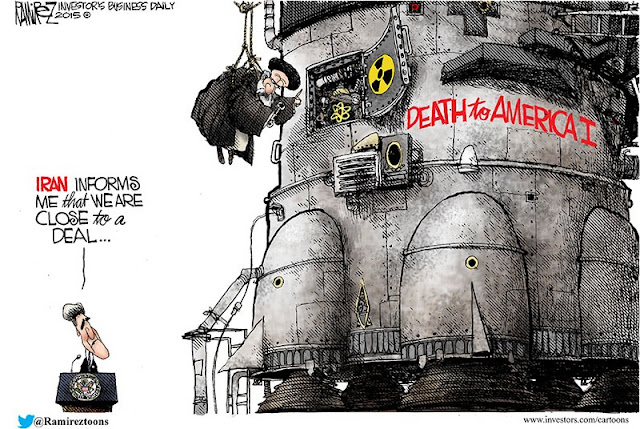 US Blacks are 12 times more likely to die violently compared to other developed countries.  The problem is that US black (men) are committing gun homicides at 7 times the rate of whites and commit over 50% of all murders.  Unsurprisingly, 90% of their victims are black. 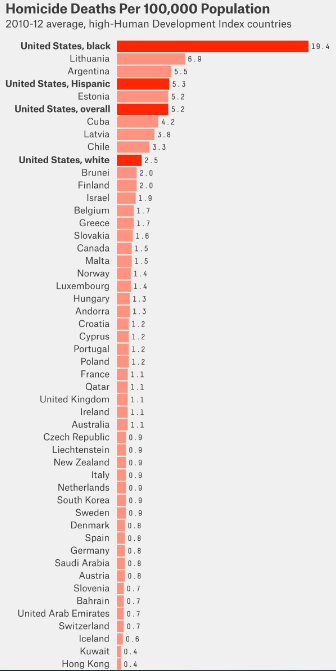 In a recent year, there were 13,000 murders, so Blacks (mostly men) will kill about 6,500 persons per year or about 125 persons per week.  This rate of deaths, week in and week out, dwarfs the number of blacks killed by crazy people like Dylann Roof (Charleston massacre) or by cops.

All of this carnage is due to 6.5% of the population -- the percentage of black men in the US.

In the wake of the Charleston massacre, Obama could only bring out his tired old call for gun control. But Dylann Roof bought a gun illegally at a gun store despite existing gun control laws and regulations.  He had a felony drug charge on his record (drug possession), and he should have be refused a gun after his background check. So, more gun rules would work?  Obama would rather take away the guns of 99.9% of good people leaving only criminals with guns.  He would never, EVER propose to take away guns from black men!  Yeah I know, it isn't impractical.  Or is it??

Idiots like Obama never learn.
Posted by Doug at 9:33 AM No comments:

Obama: Wrong About Everything

It's almost funny how wrong Obama's Left is, if it wasn't so sad and detached from reality.  Yep, extreme Leftism is a mental illness when it's clash with reality is so striking.  Let me count the ways that Obama is wrong. They are:

Wrong to help disarm Ukraine in 2009 (as Senator Obama), wrong not to support the Baltic states after Russian aggression, wrong not to speak up and support Iranian student protests in 2009, wrong to go AWOL during Benghazi attack. Wrong to order the entire executive branch to lie and spin about the real terror nature of Benghazi attack.

Wrong about "they didn't build that," wrong about blaming honest and responsible gun owners for everything, wrong about the VA and his faith in socialized medicine, wrong about IRS abuses, wrong to lie about no 'smidgeon of corruption,'

He's wrong and continues to be wrong in trying to make Congress irrelevant and subverting our Constitutional system just because he's completely incompetent in his job,  wrong about shovel-ready jobs, wrong to heap $8 Trillion in new debt on the next generation (with nothing to show for it!), proven wrong about his unilateral immigration action by multiple Fed Judges overruling his illegal executive order, wrong to ignore public discontent with his immigration policy during the 2014 election, wrong to create chaos at our borders by promising to not enforce existing laws and by promising "free stuff" to the lowest of the low immigrants, wrong about climate change, wrong about wanting expensive energy when we need cheaper energy, wrong about the war on coal and raising income taxes during a recession, wrong about the minimum wage.

Wrong about the UNaffordable Care Act, proven wrong about every supposed benefit, wrong to make non-ACA compliant policies illegal, wrong about mandates, wrong about exaggerating ACA's "success"-- Wrong to destroy America's vibrant free-market healthcare marketplace to help just 1.5% of the US population. Wrong to hide the law’s obvious failures from the public until after the 2012 election.

Yet, despite being wrong about everything, snubbing Allies, spanked by courts and election losses, this ignorant and supremely arrogant slacker is unapologetic and certain that he's right about everything despite all evidence to the contrary.  Sick, disgusting and disgraceful.
Posted by Doug at 9:53 AM No comments: