Words like "Armageddon," "financial crisis," and "devastating" are being used by leaders of central banks and economists these days. Mervyn King, former Bank of England governor, says that Central Banks don't have any ammunition to fight the next recession because interest rates are negative, zero or close to zero in most of the world.

From the Guardian in October 2019:


The world is sleepwalking towards a fresh economic and financial crisis that will have devastating consequences for the democratic market system, according to the former Bank of England governor Mervyn King…. King said the resistance to new thinking meant a repeat of the chaos of the 2008-09 period was looming…. He added that the US would suffer a “financial Armageddon” if its central bank – the Federal Reserve – lacked the necessary firepower to combat another episode similar to the sub-prime mortgage sell-off…. King said the world economy was stuck in a low growth trap and that the recovery from the slump of 2008-09 was weaker than that after the Great Depression.… King said it was time for the Federal Reserve and other central banks to begin talks behind closed doors with politicians to make legislators aware of how vulnerable they would be in the event of another crisis.

And McKinsey indicated recently that fully 1/2 of all banks in the world are too weak to survive a recession. That doesn't sound good! From Forbes:

More than half of the world’s banks are too weak to survive a downturn, according to a survey from consultancy McKinsey & Co.

A majority of banks globally may not be economically viable because their returns on equity aren’t keeping pace with costs, McKinsey said in its annual review of the industry released Monday. It urged firms to take steps such as developing technology, farming out operations and bulking up through mergers ahead of a potential economic slowdown.

“Risks to financial stability have continued to build up in Germany,” the Bundesbank warns in its Financial Stability Report

Many yield-starved banks have significantly expanded their lending to “relatively high-risk businesses” while simultaneously reducing their provisions against losses on lending. As the Bundesbank puts it, “there are signs that banks’ lending portfolios now include a higher share of enterprises whose credit ratings could deteriorate the most in the event of an economic downturn.”

Moody's has downgraded its outlook for German lenders from “stable” to “negative” as profitability and creditworthiness deteriorate in a negative interest rate environment.

It's no wonder EU banks are in trouble. Negative interest rates, bank bail-in rules and no possibility of cross-border bail-outs lead the reasons for depositors to flee EU banks. If you intended to destroy your banks and financial system, then the EU is doing everything imaginable to do it. And flee they are:

The biggest and most important bank in the world, Deutsche Bank, is teetering on the edge of bankruptcy (but has been for awhile): 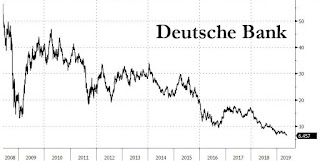 
It's possible that we will remember September 16, 2019 as the start of the next acute financial crisis. That day, the overnight rate for overnight inter-bank loans (Fed Funds) soared from the targeted 1.5 to 1.75% to 5% or so. It started with problems in the Repo markets that are used by non-banks like hedge funds and other banks for temporary liquidity. Repo distress spilled-over into Fed funds. But, since a sustained rise in Fed Funds rates would crash the financial system, the US Central Bank began an effort to flood the market with liquidity through Repos (very short term loans from overnight to 1 or 2 days to 42 days recently) to satisfy bank/non-bank demand. That Repo demand hasn't calmed down or declined since September, it's accelerated!

The scale of the Federal Reserve bank intervention is astonishing. It's now more than 1/2 TRILLION dollars (and rising)!  How come the Fed was surprised?  How come there is complete silence about it?

The big question regarding Fed Funds is why weren't the "dealer banks" (especially the big 4 Wall Street banks but there are 21 others), with whom the Fed gives money (reserves) thru open market operations, lending to other banks? After all, there are big profits for the big banks to lend at elevated fed fund rates if they indeed have excess reserves. But they didn't despite the profit potential of those trades. The Fed had to intervene as the normal liquidity transmission was broken. It still is (in repo)! In fact, the rate of repo operations/interventions have grown enormously!  (Fed funds and Repo are different markets but are both conduits for short-term liquidity. Only Repo is open to Hedge Funds as well as banks) 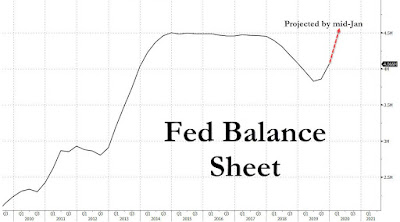 This means that the inter-banking transmission system was not working and was/is frozen-up. This is the very definition of a financial crisis. Why? Banks are not lending to other banks possibly because of the counter-party risk of other banks, possibly due to risky banks in Europe or they don't have the money? Either way, the Fed has gone from lender of last resort to lender of FIRST resort especially in Repo. We are left to assume that one or more big banks or financial entities are near bankruptcy--probably in Europe. But The Fed is not saying anything about this, presumably to avoid creating a panic. Even in recent press conferences, Jay Powell is not even asked questions about this by reporters, presumably by agreement with the press to keep this all secret.

All of these Repo operations are short term to very short term (overnight). Going into next year, all of these liquidity injections reverse.  It'll be very interesting to see what happens.  But as of right now, there is no lessening of liquidity demands. I find it quite worrisome. I think permanent QE is returning next year, perhaps QE forever.

From GSN Economics: "Central Banks, in their efforts to “save” the world economy since 2009, have created a monster: a dysfunctional, extremely-speculative and highly-leveraged financial sector. All that is needed for it to unravel are rising rates in an some important, if obscure, corner of the capital markets—just like the Repo-markets."
Posted by Doug at 8:53 AM