You Can't Get Any More Stupid. Frederick Douglass Statue Vandalized in Rochester

From Paul Joseph at Summit News

A statue of black anti-slavery activist Frederick Douglass was torn down overnight in Rochester, New York.

Rochester Police are investigating damage done to a statue of Frederick Douglass in Maplewood Park. It happened over the weekend, and police say that the statue was torn off its base, and left about 50 feet from its pedestal. The statue had been placed over the fence to Genesee River gorge and was leaning against the fence,” reports WXXI News 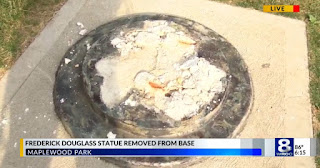 “Police say in addition to the damage at the bottom of the statue, one of the fingers on the left hand of the statue was damaged. Aside from that damage, there was no graffiti on the statue or in the surrounding park. The statue has been removed for repairs.”


Frederick Douglass was a social reformer who escaped from slavery in Maryland and went on to become a national leader of the abolitionist movement in Massachusetts and New York who was noted for his outstanding speeches and antislavery writings.

[Doug here: Some fools will say that it's white supremacists who damaged it, but there is not much history of white folks damaging our public property. Anyway, violent, lawless white supremacists are statistically non-existent. Only the lying media propagates that lie.

Only ignorant fools, white or black niggers'did this. Yes, some whites are so ignorant now that they deserve to be classified as white niggers!]
Posted by Doug at 6:45 AM