"The total number of people who continued to claim unemployment compensation in the week ended July 4 under all state and federal unemployment insurance programs, including gig workers, jumped by 1.41 million people, to 32.92 million according to the Dept of Labor. 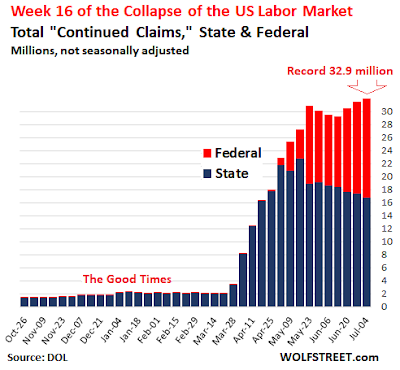 But just last week, the Bureau of Labor Statistics came out with a shocker that the number of unemployed people fell by 3.2 million in June, to 17.8 million! (from last week). Of course that sent the all-important stock market to the moon. (I'm joking, I don't even remember)

The difference between those actually receiving unemployment insurance from both State and Local (now 32.9 million people) and the number of people that the BLS claims are unemployed (17.8 million) has today exploded to 15.1 million.

In other words, the BLS has under-reported the number of unemployed by at least 15.1 million people (32.9-17.8=15.1)!  Has government competence completely collapsed or are they just liars??  I think both.