Jacob Blake already had an outstanding arrest warrant for sexual assault when stopped by police in Kenosha last month. On July 6, 2020, AP says that Kenosha County prosecutors charged Jacob Blake with third-degree sexual assault, trespassing and disorderly conduct in connection with domestic abuse. An arrest warrant was issued for Blake the following day. Police knew this.

More video evidence shows that Jacob Blake was failing to respond to police commands even after they Tasered him. With guns drawn and police yelling at him to stop, Blake tried to reach inside the floor of his vehicle. See the video at this New York Post story. The police had no idea if there was a weapon in the car. They literally HAD to shoot him according to any and all police department's procedures.

And in 2015, Blake DID HAVE a weapon in the floor-board of his car in a violent interaction with police:.

In 2015, Jacob Blake, 24, of Racine, was charged Monday in Racine County Circuit Court with one felony count of resisting arrest causing a soft tissue injury to a police officer and one misdemeanor count each of carrying a concealed weapon, carrying a firearm while intoxicated, endangering safety-use of a dangerous weapon, and disorderly conduct. If convicted, he will face up to 8-1/2 years in prison and/or up to $50,000 in fines.According to the criminal complaint, Blake and two women were at the Brass Monkey tavern, 1436 Junction Avenue, Saturday when Blake got into an argument with another patron and pulled a black handgun. Blake pointed the gun at the other man, and the magazine fell to the floor. The bartender told Blake to leave, and he did but then pointed the gun through the window at patrons inside the bar before walking south on Junction Avenue.

Police say they encountered a woman walking on Junction who was in the bar with Blake, but she said she didn’t know what happened and that her friends left without her in a silver SUV. A few moments later, officers were advised that a silver SUV was traveling north on Junction with a male subject driving who matched the description of Blake, and they initiated a traffic stop in the 1200 block of Racine Avenue.

Believing the driver was armed, police conducted a high risk traffic stop, the complaint reads, and ordered Blake to put his hands out the window of the vehicle. Instead, Blake exited the SUV and started walking toward officers and ignored commands to get down on the ground. Officers forced Blake to the ground and ordered him to put his hands behind his back. When Blake refused to comply, K9 Dozer was deployed to force the defendant into compliance.

While police were at the hospital with Blake so he could be treated for the wound he obtained from K9 Dozer, officers say he refused to answer questions, but he did submit to a legal blood draw to determine his level of intoxication. At the time he was taken into custody, Blake was searched and police say he had a holster on his hip but no gun. A subsequent search of the SUV turned up a black handgun on the floor behind the drivers seat. A box of ammunition was also found, and two loaded magazines were discovered in Blake’s coat.

Basically, because Blake could not control himself and became an imminent threat to the officers, he had to be put down like a wild animal. He, like so many black men, committed "suicide-by-cop" with his actions and lack of impulse control. This also explains why blacks commit violent crimes at SEVEN TIMES THE RATE compared to whites.  Unfortunately, the police were totally justified in shooting him.

In a Spectator.org article, toxicology evidence from May 31st, 2020 and a memorandum that contained exculpatory evidence was finally released on August 25, 2020 (after all the riots of course).

Saint George was complaining about an inability to breathe all along, even when standing. This was because his lungs were already filling up with fluid due to lethal levels of Fentanyl. He was a dead man walking. 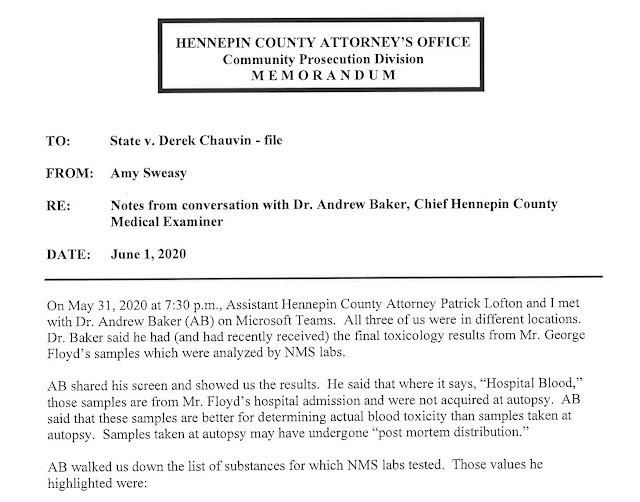 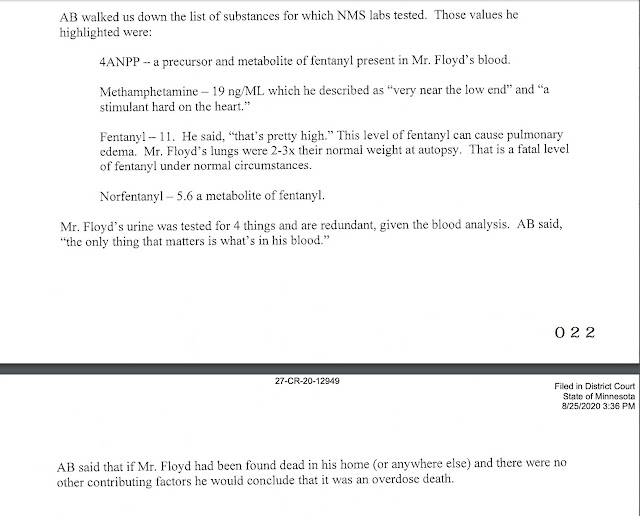 From the Spectator.org article:

"Dr. Baker, the chief medical examiner, had to concede that at 11 ng/mL, Floyd had “a fatal level of fentanyl under normal circumstances.” He also conceded that the fentanyl overdose “can cause pulmonary edema,” a frothy fluid build-up in the lungs that was evidenced by the finding at autopsy that Floyd’s lungs weighed two to three times normal weight.

This is consistent with Officer Kueng’s observation at the scene that Floyd was foaming at the mouth and, as found at autopsy, that his lungs were “diffusely congested and edematous.”

In other words, like a drowned man, Floyd’s lungs were filled with fluid. And that was the obvious and inescapable reason why Floyd kept shouting over and over again that he couldn’t breathe even when he was upright and mobile.

The memorandum ends with Dr. Baker’s devastating conclusion that “if Floyd had been found dead in his home (or anywhere else) and there were no other contributing factors he [Dr. Baker] would conclude that it was an overdose death.”

Translation: this toxicology report drives a stake through the heart of our murder case. How do we justify criminally charging these police officers and explain away our colossal screw-up?

It is quite telling that this explosively exculpatory June 1 memorandum was not released by the prosecution until August 25, 2020. All of which prompts these questions:

First, why did the prosecution wait three months to release this memorandum?

Third, in light of Floyd’s toxicology results and the medical examiner’s assessment that Floyd’s fentanyl overdose caused him to essentially drown in his own bodily fluid, why haven’t the charges against all of the police defendants been dropped?

The handwriting is on the wall. Through all of the rioting, looting, and burning, the prosecution has kept secret its knowledge that George Floyd died as the result of a self-administered overdose of fentanyl. The Chief Medical Examiner of Hennepin County said as much way back on May 31, 2020.

But, now that the truth has finally emerged, it’s well past time to call a halt to this illegal and unfounded “murder” case and to let these wrongfully accused men go free."
Posted by Doug at 8:38 AM