Blacks Ruin Everything; BLM is ISIS, No Humility in Sight

Blacks ruin and destroy everything: public housing, their families, their neighborhoods, their communities, their cities, their countries. We are now seeing huge amounts of mindless chaos and destruction across this country usually led by blacks and other minorities. Their vandalism of statues is reminiscent of ISIS mindlessly tearing down priceless antiquities in the Middle East. In fact, you could say that BLM is our equivalent of ISIS.

Idiot Shaun King wants to tear down statues of Jesus and he claims it's a form of white supremacy. What a fool. Statues of Washington and Jefferson aren't safe with black mob rule. Few of those idiots know that Washington and Jefferson began the reversal of slavery along with white leaders in Paris and London. Yes, you got that right, it was white people who ended the worldwide status quo of slavery. Conversely, in Africa, slavery wasn't made illegal for hundred's of years later.

These people can't get anything right. Even BLM is based on lies. Michael Brown was a horrible fat-ass thug who attacked a police officer twice and had to be put down like a wild animal. Hands up, don't shoot my ass! What a fucking joke.  Eric Holder's DOJ went to Ferguson to investigate charges of racism in Ferguson. What they found in Ferguson, a population of 20,000 persons — 16,000 people have outstanding arrest warrants. Few black persons can follow the rules or the law.

Our Congressional Black Caucus is a complete disgrace of mindless ignorance and idiocy. Sadly, they well represent their mostly idiot constituents. Blacks vote for Democrats even though it was the Democrats that ended their post civil war civil rights gains and extended inequalities for another 100 years until the 1960s. Democrats are the party of KKK, Jim Crow, but blacks love them now because of "free stuff." That's literally their mentality.

Brazil, with a majority black and black/mix ethnicity, has a murder rate some 6 times the rate of that in the US!  Conditions in Africa range from very poor to catastrophically bad.  The same can be said of places like Haiti and Jamaica. There is very little evidence that Blacks can create any kind of orderly, prosperous or peaceful cultures anywhere.

Formerly prosperous South Africa is collapsing under black rule. They can't even keep the electricity online consistently. Bands of black thugs are attacking, terrorizing and killing white farmers. Land confiscation is underway, mostly farm land held in white hands. Their plan is to put black people on these farms, but they'll find that they will starve to death just like they did in Zimbabwe. 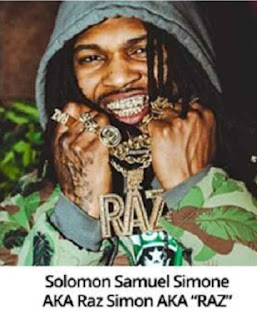 Back in the US,  Raz Simone, a so-called "rapper," appointed himself warlord-in-chief in Seattle's CHAZ. Within hours, violence commenced, whites in attendance were told to give each black person "reparations"of $10. Now the "autonomous zone" (it's not autonomous since it needs power, water, trash collection, emergency services, etc) is being shutdown due to chaos, fights, thuggish attacks, shootings and vandalism. Not surprising to me considering black rappers have very low life expectancies due to their violence.

"Raz is connected to Islamists. He is involved in the Manifesto, Washington State – the first black Muslim independent state. He also is being sponsored and has been hosted by the Dubai government. Raz’s anti-white and anti-America rants are supported. He also has been spotted attending the Sheik Zayed mosque." (source and another source)

Here's a video of Raz handing out AR-15 weapons and searching for people with experience with guns.

No one is speaking out or arresting criminals. Cops are being "handcuffed" by their Democrat city "leaders" and they are quitting. This is all about Democrats creating chaos to smear the Trump administration. This is yet another ploy to remove or defeat Trump.
Posted by Doug at 8:32 AM

THEY ULTIMATELY WANT TO RUIN EVERY THING WHITE IN AMERICA AND TURN IT TO BLACK COMMUNISM AND MAYBE MUCH? LATER ON MAKE WHITES SLAVES

People fear being labeled a racist, personally I don't care. Facts are facts and the facts are...blacks ruin everything. I got suspended in college years ago for an in-depth piece of curriculum I wrote describing how far along a pure White society would be had we not been burdened with the plight of blacks and other third world invaders. Trillions and trillions of wasted dollars have been spent on black and brown races to make them feel equal, give them hands up and hand-outs. Trillions of man hours wasted on policing their crimes, locking them up, caring for their wounds, billions in unpaid hospital bills delivering more and more black and brown babies to further burden society. It will never stop. White people could have occupied and populated a distant star had it not been for the plague of black and brown. Unfortunately, in a mere 30 years, Whites will be either totally emasculated or outnumbered, our voices will be heckled and laughed at. My grandchildren could very well indeed be subservient to the very people my ancestors tried hard to make equal. Money, laws and politics can never change D.N.A., being a productive member of a civilized society is simply not encoded withing the black D.N.A., it's missing. They are tribal, never contemplating ideas past their current day of activity. Future planning, insight, creativity beyond their current need is not possible with sub-par I.Q. Books and literature have been written on these very topics (sub-par black I.Q.) but for obvious reasons, have been buried, their authors ostracized from history. All we can do as average White people is avoid them, stay far away from populated areas, keep and maintain adequate protection devices, long and short, and stocks of food/water and other life's essentials. We'll never "wake people up" - this country is cooked.

What we need is independence from the liberal parts of the country. The rest can rot.

We all know about these animals.... when there not stealing or preying on there own... they re slinging drugs or shooting up their cities. Send them back ... I hate everything about them ....