The Shaky Foundation of the US Stock Market Bubble

The US stock market is dominated by just 5 stocks that have soared to extraordinary valuations. This has buoyed the averages enormously. But few are aware of how shaky these foundations really are. From Wolf Richter, 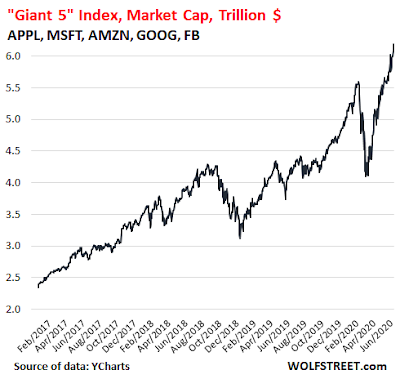 Apple and Microsoft both are now worth over $1.5 trillion. Amazon is at nearly $1.4 trillion, Alphabet at $1.0 trillion. These are gigantic valuations. They also speak of an immense concentration of power in a single company.

The market, and broad portfolios, are immensely dependent on the Giant 5. That was great on the way up – on their way to becoming giants, when their share of the overall market doubled in three-and-a-half years, from 10% in January 2017 to nearly 20% today.

Here's the thing, the fundamentals of these "Giant 5" stocks start great but eventually the fundamentals shrink, as often happens with dominant companies in their markets, due to diminishing returns. It's inevitable.

For example, say a company, that has a great idea, sees a potential market of 1000 units of potential demand when they start. And let's say that during the first fabulous year, they supply 200 units of demand or 20% of the market. The 2nd year, they continue their wonderful success at 20% growth, so they get 20% of the remaining potential market of 800 units which means that they sell 160 units. Even with 20% growth continuing, which is great (and the company enjoys a high stock market valuation), the 3rd year, their sales are 128 units.  Over time, as their market is exploited, their sales go down inevitably. Sure, they try to find other markets to exploit to keep up their revenue rising and they often do so.

At first, the company's stock valuation should be high as sales and profits are plenty. But over time, the company matures and as revenue shrinks due to market saturation, stock market valuations would normally be expected to fall.

However, in our modern world with extremes of unsound money and finance, these same companies borrow money at very low interest rates and buy-back their own stock on a regular basis (which used to be considered stock manipulation and therefore illegal). This shrinks the shares outstanding which has the effect of boosting their "earnings per share." They also sometimes borrow money to pay an attractive dividend. Nice dividends also boost the stock price. It's like magic! Apple has been doing this for years even though their revenues are largely flat-ling now and debt keeps building on their once-pristine balance (which no one pays attention to --because these companies are, afterall, giants in their field.)

This is how they maintain their appeal to inexperienced investors. But eventually, these giants fall and when they do, they'll take down the market averages hard.

Below is a graphical result of this effect of diminishing returns ---showing the giant 5 companies and their revenue changes over time (from John Hussman) Remember these are the heart and soul of "Growth Stocks":

The chart above shows the ACTUAL revenue decline of the Giant 5 over time. Remember, these five stocks are the pillar of the US stock market indices and have HUGE bubble valuations today. These stocks are "sold" as GROWTH COMPANIES which is why they have huge valuations!

You can see that Apple revenue growth is already flat-lining at near zero revenue, but their EPS goes up based on share buybacks and by paying dividends. Apple is an expensive stock! The big problem for these companies is that, today, their valuations are extremely elevated vs. their inevitable diminishing returns going forward. Also, their current stock prices do not reflect sudden effects of government lawsuits, changing consumer preferences or a pandemic(!).

I forgot to mention how most of these "Tech" companies are really in the advertising business-- Advertising is a very cyclical expense for businesses. Did I mention that the US is in an economic depression whose worst effects will show up in the months ahead???