Finally, after years of appeasement by Hillary and Obama (they were busy overturning regimes in Libya, Ukraine, Syria and Egypt after berating Bush II for deposing Saddam), the US has finally put it's foot down on the gross violation of international maritime law by China. China has made outrageous and ridiculous claims to the entire South China Sea as "MINE." ("That's Mine" is the unofficial legal basis for property rights in Communist countries. Keep that in mind when you see all of the communists that will occupy Biden's cabinet).

The rest of the world follows the UN law of the sea (UNICLOS acronym for UN Convention on Law of the Sea) which allows each nation the right to exploit waters out to 200 miles for their own exclusive economic use including oil/gas mining, fishing, fish farming, mineral extraction,etc. It is the basis for every offshore oil and gas leasing program for every country in the world including the US.

Every nation with ocean access adheres to this norm except CHINA! They want to militarize the entire South China Sea in a military expansion to dominate and control the entire region; the shipping lanes, all mineral exploration, aircraft fly zones and, of course, Taiwan. 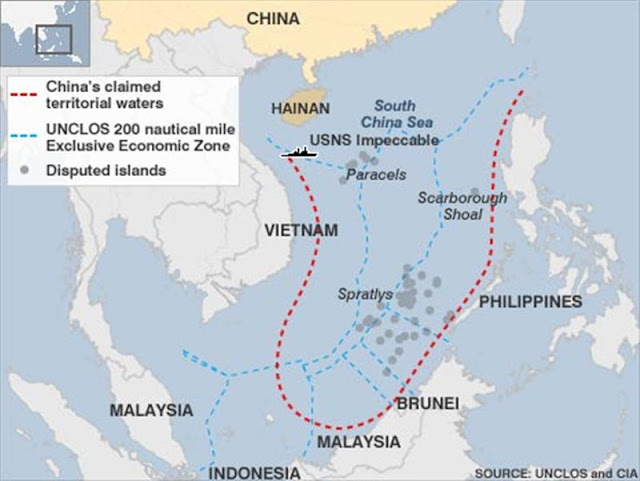 Most recently, China has been building or expanding islands or the rock outcroppings far outside of it's EEC to create military bases complete with sophisticated weapons, radar and personnel. This despite a tribunal in The Hague ruling against these ridiculous claims on the entire S.China Sea in 2016.  Not only are they militarizing the claimed areas, but bullying neighbors who are actively exploring for oil in their own economic zones. They've also been hysterical when Australian, British or American warships traverse international waters in that region.

China has been inflaming the region with their outrageous territorial claims for years.They have even used military force and intimidation in recent years to step on it's regional neighbors. As recently as July 2012, there was a stand-off with China and the Philippines recently regarding the Scarborough Shoals off of the Philippines (see map). Both sides had military vessels in the area and tensions ran high.


In 2014, China declared it's own exploration and production blocks inside of Viet Nam's internationally recognized Economic Exclusion Zone (see the map to the right). They even sent a flotilla of ships and gun boats to disrupt an operating drilling rig in existing leased exploration blocks in Vietnamese waters. It's the true thuggery that you'd expect from Chinese imperialist pigs.


Anti-Chinese riots by Vietnamese erupted all over the country with 21 dead and 100s hospitalized. Unfortunately, a number of Taiwanese people and company's were also attacked as rioters mistook them as mainland Chinese.

Hundreds of Chinese working in the zones have fled, most to neighboring Cambodia and others by air. “Yesterday more than 600 Chinese people from Vietnam crossed at Bavet international checkpoint into Cambodia,” Cambodian National Police spokesman Kirt Chantharith told Reuters. Bavet is on a highway stretching from Ho Chi Minh City, Vietnam’s commercial centre, to Cambodia’s capital, Phnom Penh.

At Ho Chi Minh City airport, scores of Chinese were arriving in large groups, queuing to grab tickets or get on the first flights to Malaysia, Cambodia, Taiwan, Singapore and China.

“People don’t feel safe here, so we just want to get out of Vietnam,” said Xu Wen Hong, who works for an iron and steel company and bought a one-way ticket to China. “Even to Thailand and Cambodia. If there are no more tickets to China, they think just leaving Vietnam is enough.

“We’re scared, of course. With all the factories burning, anyone would be scared in this situation.”In Binh Duong province alone, police said 460 companies had reported some damage to their plants, local media reported."

So, finally the US has had enough of this shit. Trump's State Department issued this directive this afternoon:

"The United States champions a free and open Indo-Pacific. Today we are strengthening U.S. policy in a vital, contentious part of that region - the South China Sea. We are making clear: Beijing’s claims to offshore resources across most of the South China Sea are completely unlawful, as is its campaign of bullying to control them.

In the South China Sea, we seek to preserve peace and stability, uphold freedom of the seas in a manner consistent with international law, maintain the unimpeded flow of commerce, and oppose any attempt to use coercion or force to settle disputes. We share these deep and abiding interests with our many allies and partners who have long endorsed a rules-based international order.

These shared interests have come under unprecedented threat from the People’s Republic of China (PRC). Beijing uses intimidation to undermine the sovereign rights of Southeast Asian coastal states in the South China Sea, bully them out of offshore resources, assert unilateral dominion, and replace international law with “might makes right."

Beijing’s approach has been clear for years. In 2010, then-PRC Foreign Minister Yang Jiechi told his ASEAN counterparts that “China is a big country and other countries are small countries and that is just a fact.” The PRC’s predatory world view has no place in the 21st century.

The PRC has no legal grounds to unilaterally impose its will on the region. Beijing has offered no coherent legal basis for its “Nine-Dashed Line” claim in the South China Sea since formally announcing it in 2009. In a unanimous decision on July 12, 2016, an Arbitral Tribunal constituted under the 1982 Law of the Sea Convention – to which the PRC is a state party – rejected the PRC’s maritime claims as having no basis in international law. The Tribunal sided squarely with the Philippines, which brought the arbitration case, on almost all claims.

As the United States has previously stated, and as specifically provided in the Convention, the Arbitral Tribunal’s decision is final and legally binding on both parties. Today we are aligning the U.S. position on the PRC’s maritime claims in the SCS with the Tribunal’s decision. Specifically:

The PRC cannot lawfully assert a maritime claim – including any Exclusive Economic Zone (EEZ) claims derived from Scarborough Reef and the Spratly Islands – vis-a-vis the Philippines in areas that the Tribunal found to be in the Philippines’ EEZ or on its continental shelf.

Beijing’s harassment of Philippine fisheries and offshore energy development within those areas is unlawful, as are any unilateral PRC actions to exploit those resources. In line with the Tribunal’s legally binding decision, the PRC has no lawful territorial or maritime claim to Mischief Reef or Second Thomas Shoal, both of which fall fully under the Philippines’ sovereign rights and jurisdiction, nor does Beijing have any territorial or maritime claims generated from these features.

As Beijing has failed to put forth a lawful, coherent maritime claim in the South China Sea, the United States rejects any PRC claim to waters beyond a 12-nautical mile territorial sea derived from islands it claims in the Spratly Islands (without prejudice to other states’ sovereignty claims over such islands). As such, the United States rejects any PRC maritime claim in the waters surrounding Vanguard Bank (off Vietnam), Luconia Shoals (off Malaysia), waters in Brunei’s EEZ, and Natuna Besar (off Indonesia). Any PRC action to harass other states’ fishing or hydrocarbon development in these waters – or to carry out such activities unilaterally – is unlawful.

The PRC has no lawful territorial or maritime claim to (or derived from) James Shoal, an entirely submerged feature only 50 nautical miles from Malaysia and some 1,000 nautical miles from China’s coast. James Shoal is often cited in PRC propaganda as the “southernmost territory of China.” International law is clear: An underwater feature like James Shoal cannot be claimed by any state and is incapable of generating maritime zones. James Shoal (roughly 20 meters below the surface) is not and never was PRC territory, nor can Beijing assert any lawful maritime rights from it.

The world will not allow Beijing to treat the South China Sea as its maritime empire. America stands with our Southeast Asian allies and partners in protecting their sovereign rights to offshore resources, consistent with their rights and obligations under international law. We stand with the international community in defense of freedom of the seas and respect for sovereignty and reject any push to impose “might makes right” in the South China Sea or the wider region."

Remember from my post "Repost from 2012: Ridiculous Claims on S.China Sea,"


China are communist imperialistic pigs hellbent on driving their economy forward at ludicrous speed because the communist party's only legitimacy is that they are creating jobs for their citizens. This includes running roughshod over the environment, personal and human rights, trade policies, their own citizens and/or international law. They lie, cheat and steal whatever they can get away with. They have destroyed their people and culture. They will do anything to stay in power including killing of nearly 100 million by Mao Zedong .They even threaten their SE Asia neighbors with raw and unlawful displays of military force. To feed their perverted drive for legitimacy, they'll distort world's commodity, currency and financial markets and they'll also do anything to crush and silence critics. We see the true colors of the Chinese Regime at work with the latest takeover of Hong Kong.

Maybe something is finally happening.
Posted by Doug at 2:57 PM