With a three aircraft carrier flotilla heading right now to disputed waters to challenge China, I thought it might be useful to re-post this explanation of how we've gotten to this ridiculous position. It's all Chinese insanity. The Chinese are insane mercantilists (unfair traders who basically block imports, except raw commodities, from most of their trading partners and run huge trade surpluses to enrich themselves). Then they make absurd claims on ALL of the South China Sea including territorial waters that many neighboring countries are lawfully exploiting.  A tribunal in The Hague has ruled against these ridiculous claims on the entire S.China Sea. The Chinese have overstepped. They have one old aircraft carrier that they brought from the Russians. But they are building more. It's time to stop their unfair trade and their unfair claims.

Have a look at a map showing Chinese territorial claims versus claims of it's SE Asian neighbors. (UNCLOS, referenced in the map below, is an acronym for UN Convention on Law of the Sea.)  Most of the world operates within the UNCLOS agreement which gives each country the right to exploit waters out to 200 miles for their own exclusive economic use. It is the basis for every offshore leasing programs for every country in the world including the US. Only China is making ridiculous claims that contradict the UNCLOS. 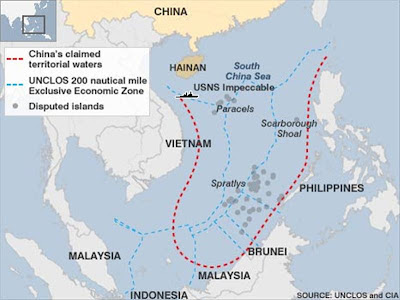 Obviously this is outrageous. It is also totally inconsistent with any modern maritime agreement or tradition. The Spratlys and Paracels islands are basically uninhabited, but the Chinese have made a big "show" by recently putting a military garrison on one of them. From the New York Times


China recently established a larger army garrison and expanded the size of an ostensible legislature to govern a speck of land, known as Yongxing Island, more than 200 miles southeast of Hainan. The goal of that move...is to allow Beijing to “exercise sovereignty over all land features inside the South China Sea,” including more than 40 islands “now occupied illegally” by Vietnam, the Philippines and Malaysia.

In the past several weeks, China has steadily increased its pressure, sending patrols with bigger ships and issuing persistent warnings in government-controlled newspapers for Washington to stop supporting its Asian friends against China.

Not only are their claims ridiculous and unreasonable, now the Chinese are using military force and intimidation to defend the ridiculous. As recently as July 2012, there was a stand-off with China and the Philippines recently regarding a Chinese show of force near the Scarborough Shoals off of the Philippines (see map above). Both sides had military vessels in the area and tensions were running high.

All of this is about oil and gas resources by the way. Vietnam has ongoing offshore leasing, exploration and production activities that include foreign operating companies within their 200 mile limit (just like the rest of the world). According to The Economist:


On June 21st Vietnam's parliament passed a maritime law that reasserted the country's claims to the Spratly and Paracel Islands (see map below). China called this a “serious violation” of its sovereignty. It responded by declaring that a county-level government which supposedly governs the two archipelagoes and much of the rest of the South China Sea from one of the Paracel Islands, had been upgraded to the administrative level of a prefecture. Chinese media described this notional jurisdiction, Sansha, as by far the biggest prefecture in the country (though its population of a few hundred people is heavily outnumbered by gulls and its ill-defined territory is mostly water). Some Chinese internet users speculated excitedly about who might be appointed mayor, but reports on some websites that a 45-year-old hydrologist had got the job were later dismissed as a spoof.

Tensions rose further with an announcement late last month by CNOOC, a Chinese state-owned oil company, that it was opening nine blocks in what China calls the South Sea to international bids for oil and gas exploration. These reach to within 37 nautical miles (68km) of Vietnam's coast, according to PetroVietnam, a Vietnamese state-owned oil firm. 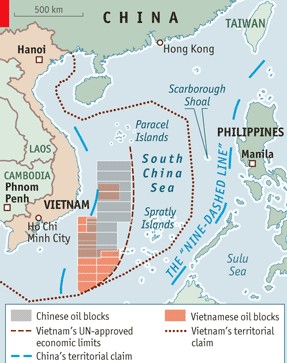 The association of Southeast Asian Nations, ASEAN, met several weeks ago and the Chinese, with the help of Chinese client-state Cambodia, squashed all evidence that this conflict was even discussed much less settled. I don't know who the Chinese think they're kidding. Do they think the rest of the world is stupid?

The American statement backs the multilateral approach to the disputes championed by ASEAN. Its members are still smarting over their failure—for the first time in the organisation’s 45-year history—to agree on a joint statement after their annual foreign ministers’ meeting, which they held last month in Phnom Penh. It was blocked because Cambodia, a faithful Chinese client, refused to accept wording on the South China Sea demanded by some of its fellow members.

China are communist imperialistic pigs hellbent on driving their economy forward at breakneck speed because the communist party's only legitimacy is that they are creating jobs for their citizens. This includes running roughshod over the environment, human rights, trade policies, their own citizens and/or international law.  They will do anything to stay in power.  They even threaten their SE Asia neighbors with raw and unlawful displays of military force. To feed their perverted drive for legitimacy, they'll distort world's commodity, currency and financial markets and they'll also do anything to hush and silence critics. We see the true colors of the Chinese Regime at work here.

It's time to stop their unfair trade and their unfair claims.  I hope Trump takes them on.
Posted by Doug at 11:08 AM

Outstanding! I can’t wait to post this on FASCISTBOOK! 30 day block. 2 more days to go lol 😝