One of major figures in resuscitating the potential of molten salt Thorium reactors is a Georgia Tech alumnus named Kirk Sorensen. He has formed a company called Filbe Energy to promote this technology as a safe, efficient and environmentally friendly alternative to Uranium-based nuclear power reactors. Thorium reactors were developed in the US in the 1950s and 60s, but Uranium reactors "won" due to the programs to develop and stockpile nuclear weapons at that time.

There are many inherent advantages with these reactors as detailed in my blog Thorium Reactors May Solve The World's Energy Crisis:  inherent safety, no need for elaborate and large containment buildings, vastly more fuel efficient, Thorium is a much more abundantly available in the world, and the fuel cycle has vastly reduced reactor waste products.

All of the images below are from Kirk Sorensen's presentation at thoriumenergyalliance.com. Detailed video explanations of the following graphics explain all of the information included below. I highly recommend the video explanation of the fuel cycle which is the 8th in the series. Please browse all of them however.


Thorium Production and Utilization is Vastly More Efficient Than Uranium 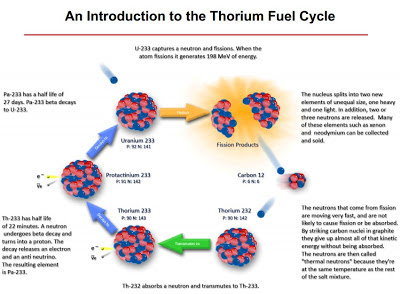 Thorium to Uranium 233 Fuel Cycle
Thorium 232, introduced in the outer core of the reactor, is bombarded by neutrons generated from the fission in the inner core and is converted to Uranium 233.  This Uranium is separated from the "fertile salt" and then feed into the "Fuel Salt" portion of the reactor as fuel.  The Uranium is then bombarded by neutrons which results in fission reactions which releases huge amounts of energy and more neutrons. The cycle continues as the neutrons converts the Thorium in the outer core to more Uranium 233 fuel.  The Uranium 233 is completely consumed in the reactor. 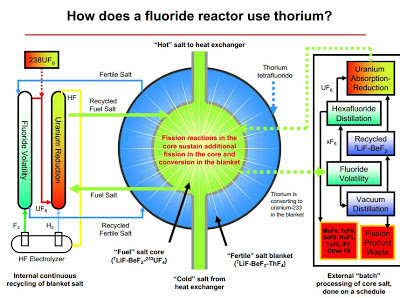 A "Cartoon" of A Thorium Reactor
The Thorium is in the outer "blanket"or "fertile" salts where it absorbs neutrons from the "Fuel Salt Core" and becomes Uranium 233.  This Uranium 233 is separated from the outer salts and feed to the inner core for fission.  Obviously fission is the source of massive amounts of energy.   The equipment on the right is for batch "cleaning" of the salts to remove "other" fission products.
Posted by Doug at 4:28 PM

I really like your writing style, wonderful information, regards
for posting :D.

What's up, just wanted to say, I enjoyed this article. It was
practical. Keep on posting!