The Non-White End of Exceptional America 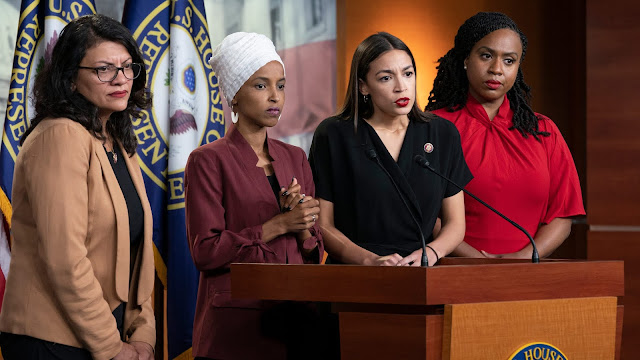 The Democrat plan to destroy America is right on track.  The Immigration Act of 1965 turned the immigrant tide toward brown and black persons and away from the traditional path of white European immigration.  Now the browns and blacks are getting elected-- assuring the complete destruction of this country -- JUST LIKE THEIR HOME (AND ANCESTRAL)  COUNTRIES --THAT ARE SHIT-HOLES AND IN COLLAPSE!!!  It's the people stupid! All of these people and their families are in the USA because their countries of origin are fucked up.

Now I understand why US Southern Democrats completely reversed the civil rights gains of the Civil War. A number of blacks got elected and they found out what they were dealing with!

The Squad are so mentally deficient that they can't see cause and effect (which requires logic) meaning that they'll never get it. They buy into destructive Leftism and Islam. To be black and Leftist is a disaster.  But to be a Leftist, black and Muslim is a trifecta of bad ideas and destruction!!  See Epicenters of Ignorance, Bad Ideas and Destruction.

Once this country is a shit hole like Somalia, the Palestinian territories, any Majority black city or State anywhere in the world, or most Latin American nations including Puerto Rico, they'll presumably move to destroy someplace else. Problem is, after America is destroyed, the world is headed into a Dark Age.

"The Squad"of apprentice congresswomen are typical of non-white minorities who are unable to see that their populations are quite inferior to the descendants of white northern Europeans and certain East Asian populations that have high median intelligence. They live in 100% denial of their reality. I'd be perfectly fine with these people if they had a little humility. Instead all you get is unfounded confidence which shows extreme arrogance in their stupidity. All of these women want to be tyrants to impose their loser ideas on everyone else: JUST LIKE IN SHIT HOLE COUNTRIES!!
Posted by Doug at 2:35 PM

BINGO MY FRIEND!!!!! Bingo!!! Bravo �� Bravo �� Bravo �� I have posted so many comments, so many stories, so many articles pertaining to the black and brown brace on Facebook and on Twitter and on YouTube. Sure I get called racist and I don’t give a shit. I also. Back up what I say with actual facts not with frothy emotional appeal. BUT. WITH. FACTS! Data, Statistics, Empirical Evidence, Empirical Research.


The fact of the matter is this. And to this day I have not found anything in writing including books and I’ve looked and looked, that can explain to me on a social level, sociologist explain to me why both these races have a deep propensity to prey upon one another. To pillage each other, rape rob each other. Let’s turn a look at your garden-variety American black male. FACT: The average one has an ego the size of Texas. And let me status for the record before I go any father so if anybody reads this I can drill this into your head. Because I seem to have to do it on Twitter, And especially Facebook.


When one is compiling data statistics empirical evidence, They are doing so in a manner to find “AVERAGES ONLY.” Not the exceptions to the rule. So my statement about their ego does not fit every single one. But, it does fit the garden variety average. Just like in college.
FACT: your garden-variety American black college football player that has been let into college is coddled, catered to throughout there entire time in college because they can’t play football in an exceptional manner and go on to the pros. But the average one is not intelligent enough, to be able to pass all courses, all test.


I know this for a fact not only from reading and researching but also from having relatives that taught at the University of Alabama and Florida State university. Both my aunts told me in no uncertain terms, “I was specifically told point blank, if you have to fudge his scores then you will.


It pains me to say this but my races addiction, the white race to football especially, has allowed and continues to allow black males to go to college that cannot hold there own academically, Because they are exceptional football players/basketball players. They do excel in sports. 100% more than they do academics.