The VA is truly socialized medicine, meaning the government owns and operates these hospitals and all of the doctors, nurses and staff are government employees.  Veterans are forced to use these facilities whether they like it or not.

In a lot of cases, they don't like it.  In many cases over many decades, veterans have been dying due to higher rates of infection caused by unsanitary conditions and poor maintenance due to poor management.  Now, it's clear that others are dying due to delays in treatment due to secret lists delaying treatment.  Horror stories of poor care abound.  See my blog Welcome to VA Death Panels, ObamaCare Panels Next.   Oh, and this poor performance is covered-up by the bureaucracy and hospital management until whistle-blowers come forward.

We are forcing our veterans to endure this.

This is exactly what I'd expect from true socialized medicine.  Not only are the care and conditions substandard, but costs are soaring even more than the rising costs of the private sector.  The whole concept of socialized medicine is to blame and it's time to start thinking of privatizing that system. 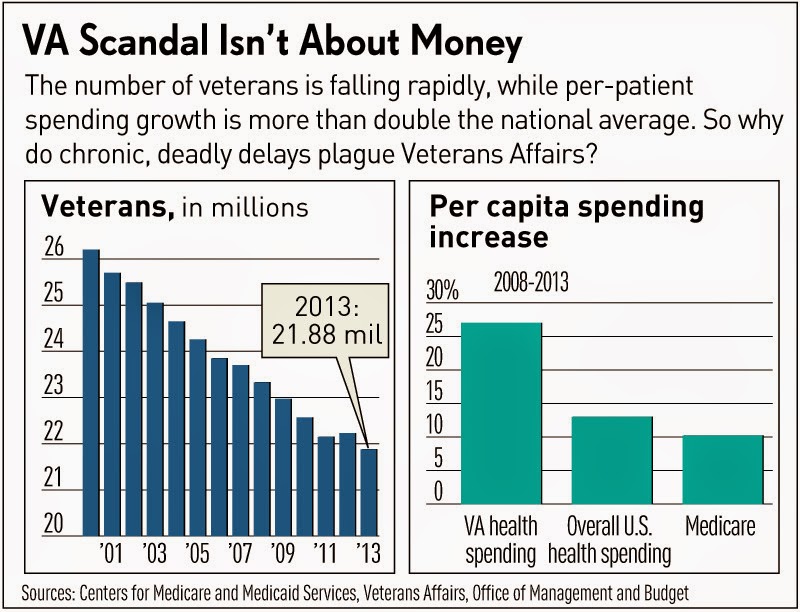 The article details how VA hospital costs are exploding relative to the private sector and Medicare.  More and more money is being spent per patient, so lack of money is not the problem.  The article also shows that it's not the cost of treatment of Afghanistan or Iraq war veterans either -- their treatment is cheaper. Those vets represent only 7% of the patients and only 4% of the cost.  Also, the number of veterans has been decreasing for over a decade too.

The VA system can't be reformed because Socialism itself is the problem!  Yeah, there can be some temporary improvements, but in the end "government care" fails it's captive "customers."  Worse Socialism ENFORCES it's mediocrity and makes it's customers victims.  The correct answer to this is to get rid of Socialism!

But socialized medicine is exactly what our President and Democrats believe in.  Obama has said a thousand times that he prefers a single-payer system (meaning government-run medicine).  I've said it a thousand times that these people never learn the correct lessons of history (or even from current events).   They simply rationalize their beliefs that the right people, meaning them, are not in charge. But the President IS in charge of the VA and he was informed about the poor care at VA hospitals back in 2008.  Worse, these problems have existed for decades.  But this rationale and stupidity prevents any real reforms.  Privatizing these hospitals and giving veterans premium support would allow them to seek treatment at a facility of their choice.   But Socialists and our Democrats are NOT about free choice and allowing people to make their own decisions!!!  And Socialists and Democrats are all about lies, cover-ups, and excuses to defend their failed beliefs and inevitable failed performance.  They refuse to acknowledge that they are wrong!!

It's so bad that the only thing that changes these people's minds is a bullet in their head.  It might come to that one day!

Socialism causes economic stagnation, a loss of liberty and ruins societies relative to free market economies.  See my blog Cuba's Stagnation to see an example of the stagnated living standards under socialism.   When there is no prosperity, medical care also suffers because there is no money.  Only free market capitalism unleashes the competition of ideas, innovation, economic freedom and competitive efficiency that brings improved standards of living and high-performing enterprises (and hospitals).

ObamaCare, the VA and  a single-payer medical system are NOT ABOUT a free and vibrant marketplace. All of these things will only worsen our medical care and raise our costs.  It's already happening.  Another thing already happening is the government bureaucracy hunkering-down and defending itself against change or improvement. Bureaucracies first and strongest instinct is for self-preservation and to defend itself.  We're already told that ObamaCare can't be repealed.