Large Scale Solar & Wind Power Not The Solution: Too Many Problems and Costs

Many people think that the future of large scale energy production lies in "renewables" like wind and solar PV power. This is not true. There are a number of insuperable problems with both of them, especially when it's share of electricity production reaches about 10 to 15%. At this level of intermittent production, the cost of grid modifications adds even more cost to these already costly and low quality energy sources. In our stagnating world economy, every country needs cheaper -- not more expensive energy.

Even with generous government subsidies and mandates, penetration of wind and solar power is still very small with about 4% of world's electricity energy mostly due to Solar PV "religion" in Germany and the rest of Europe. It's only about 1% of the total in the US. 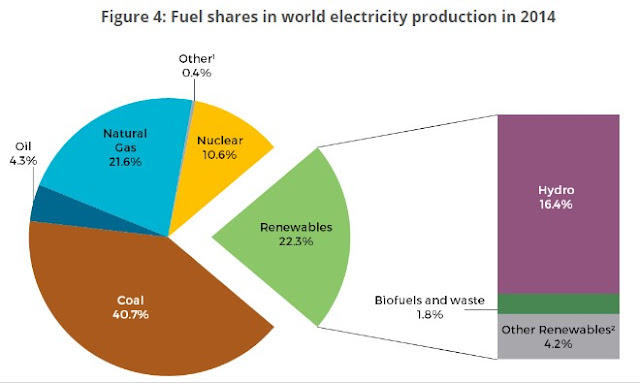 The cost of solar & wind power is a large burden to consumers and taxpayers where there it has been adopted on a large scale, such as in Europe. The average cost of electricity in the US is about $0.10 per KW-h but Germany and Denmark burden it's people and industry with punitive costs of $0.33 per KW-h. It's mostly due to subsidies for the renewables since these expensive forms of power are not economic. Even then, all of the costs are probably NOT included in the unit costs. The reality is likely worse. For example, Germany has installed additional power cables to/from Sweden and France to help cope with the intermittent nature of this alternative power. Subsidizing conventional power companies, who remain partly on standby when there is abundant sun and wind, adds to the burden. Taxpayers are picking up this additional tab.

All of the intermittent power sources such as wind and solar PV require basically a 100% backup because there is no solar power at nights or during much of the winter (when power demand is highest). Wind power is very intermittent (unreliable) as well. So, going forward, widespread (>10% of total power generation) adoption of such intermittent power basically doubles the capital costs.

How can paying twice the capital cost ever make sense? Yes, existing power plants are already built, so people take comfort in ignoring the conventional utility power companies. But as subsidies rise for homeowner installations, the power utilities find their revenues and profits are down, so THEY begin to require subsidies as well.  This means that subsidies then are required for everyone!  All this to support these low quality and expensive alternatives! How can this ever work?

Many countries, including many in Europe are already having debt problems. Solar and wind subsidies ADD to their problems! It's really insane.

The Figure below shows some of the more obvious problems with Solar and Wind that ultimately limit it's adoption on a wide scale. Gail Tverberg writes frequently about these issues in her blog called Our Finite World.
The cost of the solar panels (alone) have become much cheaper recently, so if you just do simple math as a homeowner for instance, the panel cost (alone) seems to make economic sense. But add the cost of installation, which doubles the price, starts to diminish the attractiveness. If one integrates the solar power to feed back to the utility grid, that adds more cost. If you try to power large power-intensive appliances such as electric ranges, central air conditioning and/or electric clothes dryers, then the number of panels and costs go up to astronomic levels. Adding batteries and inverters to power your home at night adds even more costs especially if you have significant loads. Oh, and forget powering central air conditioners on batteries --- it ain't going to happen.

On a regional or national level, the example of Germany shows the problems with widespread solar PV power adoption. For 4 months of the year during winter (when their power demand is highest), there is little sun since they are at 50 deg N Latitude with plenty of clouds, so they are reliant on conventional power generation (or purchased power from Sweden or France). In the summer, when the sun comes out, the surge of solar power generation requires that nearly all of traditional power generation to shut down and/or requires them to sell power to neighboring countries. Furthermore, wholesale spot power rates go NEGATIVE during sunny periods meaning producers aren't making money to add to the grid, they're LOSING money during these peaks.. If you don't have neighbors to sell to, then that creates a huge problem due to the time required to start and stop large conventional production. And the electric power grid must be modified to accommodate these variable power flows-- which costs taxpayers money. Then, idling conventional plants in summer cause the electric utilities to lose money where they aren't able to pay investors their dividends, so Germany has to provide assistance to the utilities!

So in Germany, the solar installations don't make economic sense because of their costs. But Germany is in the grip of a climate change/solar energy fantasy which borders on a false religion since solar has never made sense there. Making public policy based on fantasy is not likely to work.

Wind has similar problems too. There are higher maintenance costs for these generators. You will often see many idle windmills in wind farms. They aren't very durable and require frequent repair.

Trying to substitute expensive energy for cheap energy is like trying to make water run uphill. It is virtually impossible to make such a system work. It makes everyone from governments to businesses to citizens poorer in the process.
Posted by Doug at 10:48 AM

I just found your site a few minutes ago. Your numbers are believable, and to me, they are correct.

I have long known that massive subsidies, plus continuous and necessary backup by conventional power sources, along with hiding the true cost, and finally salted with some outright lies -- I have long known that wind and solar (to name two) cannot replace enough of conventional power to power humanity merrily along as fossil fuels get dirtier and ever more expensive.

Gail Tverberg tells the unvarnished truth, as well as Ugo Bardi, and now you.

Thank you for your blog and the effort you expend. Thank you very much !