I just posted an article entitled Large Scale Solar & Wind Power Not The Solution: Too Many Problems and Costs. There I make the argument that these unreliable and low-quality power sources are too expensive to be adopted on a wide scale. Where it is adopted on a large scale, in Europe, electricity prices are three times higher in order to provide the widespread subsidies for both consumers and conventional utilities. These alternative power supplies are not economic in a free market, especially when all the costs are included.

More evidence of how uneconomic these forms of power are is found in an article from Mises Institute called "More Solar Jobs Is a Curse, Not a Blessing" and an article from Zero Hedge.  The Mises article talks about the large employment in these alternative energy industries. More jobs are good right?? Not really. Instead, the large number of jobs shows how inefficient, unproductive and wasteful this industry relative to the small quantity of power that they produce. 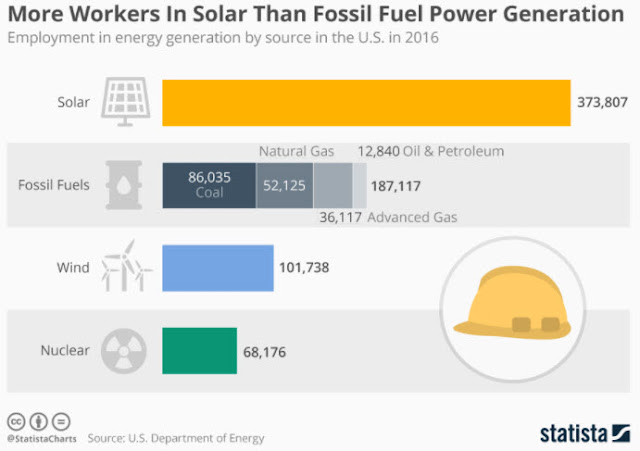 And when you look at the overall picture, solar and wind power generation is even worse than this.

Wind and solar's inefficiency extends to the cost to manufacture and install wind and solar power generating equipment. More carbon may be emitted in the manufacturing, installation and maintenance of this equipment than they save!  It takes a lot of land, steel, concrete, transmission lines to build these facilities all requiring fossil fuels to produce and install.

Wind and solar are so unreliable that they require nearly 100% backup by convention fossil fuel power plants which doubles the capital investment (going forward). By this measure alone, wind and solar at least doubles their installed cost. No "experts" will tell you about this. The cost of grid modifications are also never included in any solar or wind energy analysis either. The only way these facilities are built is through various subsidies from various governments. And once subsidies are provided to solar and wind producers, subsidies are also required by the conventional power producers.  Wind and Solar power isn't economic and they probably fail to reduce carbon emissions as well.

Wind and solar power are not our long-term solution for large-scale power. As I stated in my post, the world needs more inexpensive energy not more expensive energy. And these alternative supplies aren't so carbon-free either. Only ideologically blinded people like Obama and Merkel are unable to see these facts. Welcome to more evidence of Western Civilization's death by intellectual idiots.
Posted by Doug at 9:58 AM