The US Economy on Life Support -- Masking Economic "Depression"

In my blog post, Why Our Economy is in an Ongoing Depression and Will Only Get Worse, I focus on very unfavorable demographic trends for all of the major economies-- all except Africa. (Africa is irrelevant in economic terms.)

When populations are shrinking and aging, which is the reality for most of the major economies taken together, then demand also declines. If demand is declining, then growth turns into outright decline. The problem is that all the debt outstanding was issued based on the assumption that the issuer's revenue will GROW so that it will able to pay both principal plus interest.  However, if the issuer's revenue SHRINKS, then they won't have a surplus to pay interest and principal. In shrinking economies, defaults soar.  Debt defaults with shrinking economies is nearly the definition of economic depression.

The only reason that Depression is not evident or reported is because government spending (using debt) has masked shrinking economies both here an especially Europe. Without debt spending, Western economies would be shrinking, ie., we would be in multi-year economic depression. The US (and most of the world) is basically on life support. See the following charts. 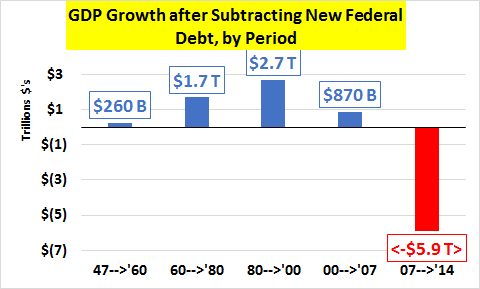 A basic lesson about macroeconomics. The equation below shows how GDP is calculated:

In this GDP equation, debt doesn't matter. And it doesn't matter if consumers or governments are borrowing money to spend --and both are. Also note that, since the US runs a consistent and large trade deficit, our "net export" part of the equation is strongly negative (We're a net importer). This is why President Trump is determined to address excessive trade deficits -- to make it less negative which will improve GDP. He's also OK with increased government spending (and more deficits/debt) since it adds more to GDP.  He's hoping that all these measures will also stimulate investment spending when manufacturing is repatriated. Investment spending has been notably absent since the GFC. There's an intellectual consistency with Trump, but few give him credit.  He's doing all the right things, but against demographic and many other headwinds.

Real economic growth potential comes from two simple factors: it is the simple sum of productivity growth plus population growth. Productivity growth is the increasing output from labor and capital which, in normal times might be 2%.  But since 2007, it's only been growing at about 0.4%. Again, if Trump can convince companies to spend money on plant and equipment, productivity should improve toward more normal levels. But it's hard for productivity to improve if population growth is low or negative and demand is low.

Population growth used to be about 2 or 3%, so, adding population and productivity together, then historically real economic growth used to be 4 to 5% prior to year 2000.  In recent years, population growth (which includes immigration or emigration) has been 0.5% but is set to turn negative in the future.  (See Why is Our Economy is in Depression and Will Get Only Worse).  So real growth going forward, barring large increases in immigration, should be expected to be only average about 1%. Worse, as population growth further stagnates and declines, that 1% growth will drop or go negative for long periods in future decades, ie., economic depression. Remember the problem with debt servicing (and an additional problem of rolling-over debt).

The US economy is not performing at anywhere near growth trends prior to 2007 and year 2000. You can see the stagnation in the charts below:

You can seet that the US growth trend has deviated markedly from long-term trends leaving a huge gap in what output should have been. No one at the Federal Reserve appears to understand what is going on. Some of it is due to the collapse of Eurodollar liquidity which is just one reason in a litany of reasons as to why our economy is reaching the end of a long road.

Although headline unemployment is at near-record lows, which 'sounds' good, but it masks a loss of millions of workers that left the workforce out of desperation, went on government assistance or retired. Since 2007, job growth has not kept up with population growth for the first time in US history.

Ten years after the Great Recession of 2008/2009, our economy has not adequately recovered and is in fact on the "life support" of ever increasing debt and easy money. There is plenty of risk that this is unsustainable. If asset markets reverse sharply, which could easily cause a recession, then our ugly reality may re-assert itself. The future looks extremely uncertain.
Posted by Doug at 12:46 PM