Don't Buy the Climate Hype: Slight Global Warming Is No Cause For Alarm

The earth has warmed a slight 1.6 deg F in the past 100 years --a little more in the Northern hemisphere and less in the Southern hemisphere -- and mostly due to man. The arctic area has warmed the most, (but not so true in the Antarctic). The sea has been rising at about 7 to 8 inches in 100 years and looks similar going forward. Those are the not-so-alarming facts.

In both cases, things are happening VERY slowly and humans can and will adjust. The warming and it's effects are quite small--despite what alarmists and their faulty models say. There is no cause for alarm.

The big problem that no one seems to understand is that just to halt the rise of CO2 in the atmosphere would require a gargantuan reduction of CO2 emissions of 50%. This would NOT roll back temperatures or CO2 -- just halt any rise!  The problem is there is a mismatch between the rate of ocean absorption of CO2 and our rate of emissions.

To reduce CO2 emissions by 50%, we would have to convert all cars to electric, add more nuclear power for the cars, and scrub every power plant stack in the country (which can't be done). The US has 10,000 power plants alone. Such reductions would cost $10s of Trillions in the US alone and cripple our finances and economy. Al Gore himself put the cost at $70 Trillion. The ocean will eventually absorb all of the excess CO2 without any harm or change in pH.

It amounts to financial suicide. No country like China or India would commit economic suicide either.   Furthermore, the result of such spending would be imperceptible and ineffective!  Oh, and NO ONE IN THE WORLD knows what to do with the massive volume of captured CO2!!

The problem is simple. There is more than a 50% mismatch between the rate that the sea and land absorbs CO2 vs the rate of emissions.  See the figure below for the carbon material balance (from MIT): 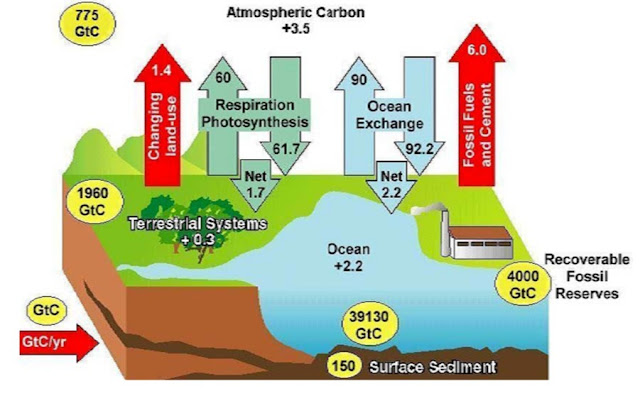 The hydrocarbon era will likely end within the next 100 years and we'll be a little warmer and the sea about 8 inches higher. Nuclear energy has to be in a lower carbon future as solar and wind power's scope is very limited due to the cost of grid modifications and other problems. Also, wind and solar power require a near 100% backup using high capacity power generation. How can that be economic?  Thorium molten salt nuclear reactors may be answer given Thorium's abundance in the Earth's crust, it's safety and it's efficiency.

For a bunch of handy graphs about global warming see here.  Judge for yourself.  Just look at the data. No panic is indicated. Economic suicide is not required. However, a program to start the transition to Thorium (or other) power should be started now for the coming decades.

Oh, and all the alarmist "scientists" and their faulty models are wrong! And to think that Al Gore almost was our president!?!
Posted by Doug at 8:19 AM