The Federal Reserve Destruction of our Nation: Making the Elites Richer and Destroying the Bottom 90%

The Federal Reserve seemingly is an ongoing mission to destroy the bottom 90%. [Doug here: it's really how the Govt and quasi-Govt Fed. Reserve are destroying the entire country. We just haven't seen violent protesters with pitchforks, Molotov bombs and torches yet --- but it's eventually coming.]

The one lesson that we have clearly learned since the 2008 “Great Financial Crisis,” is that monetary and fiscal policy interventions do not lead to increased levels of economic wealth or prosperity. What these programs have done, is act as a wealth transfer system from the bottom 90% to the top 10%.

While we will address the statistical data, there is also the anecdotal evidence which supports this thesis. Since 2008 there have been rising calls for socialistic policies such as universal basic incomes, increased social welfare, and even a two-time candidate for President who was a self-admitted socialist. Such things would not occur if “prosperity” was flourishing within the economy.

As I addressed recently:


“The disparity between the Fed’s interventions, the stock market, and the real economy has become abundantly clear. For 90% of Americans, there has not been, nor will there be, any economic recovery.” 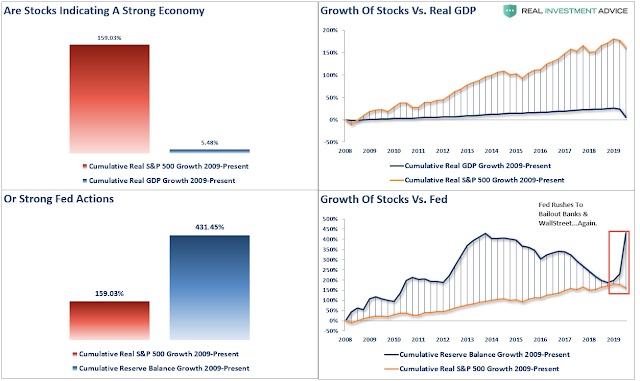 Stocks Are Not The Economy

Take a close look at the chart above.

Companies derive their revenue from the consumption of goods, products, and services they produce. There, it is logical stock price appreciation, over the long-term, has roughly equated to economic growth. However, that relationship has become unhinged since the financial crisis due to the Fed’s interventions and suppressed interest rates.

From Jan 1st, 2009 through the end of March, the stock market has risen by an astounding 159%, or roughly 14% annualized. With such a large gain in the financial markets, there should be a commensurate growth rate in the economy.

While monetary interventions are supposed to be supporting economic growth through increases in consumer confidence, the outcome has been quite different.

Low, to zero, interest rates have incentivized non-productive debt, and exacerbated the wealth gap. The massive increases in debt has actually harmed growth by diverting consumptive spending to debt service.

“The rise in debt, which in the last decade was used primarily to fill the gap between incomes and the cost of living, has contributed to the retardation of economic growth.” 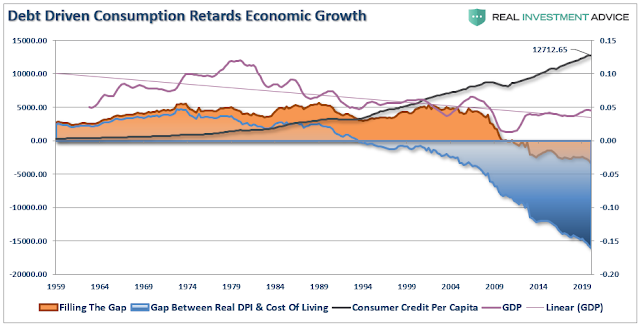 If wages don’t rise at a pace fast enough to offset the costs of maintaining the “standard of living,” individuals are forced to turn to credit to fill the gap. The lack of savings was a recent topic of discussion by the Wall Street Journal:

“Roughly half of U.S. households have no emergency savings, according to a Federal Reserve survey released last year. Those that do may not have enough. Almost 60% said they couldn’t tap into rainy-day funds, borrow from family and friends or sell something to cover three months of living expenses.” – WSJ 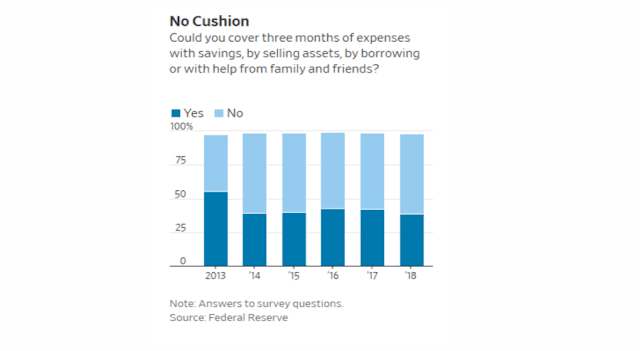 There are two reasons for the lack of savings.


“First, incomes for all but the highest-income Americans have been stagnant or falling for decades. Median household income in 2018 was only about 3% higher than in 2000 after adjusting for inflation, according to the Census. For the poorest 20%, incomes had declined 2%.” -WSJ 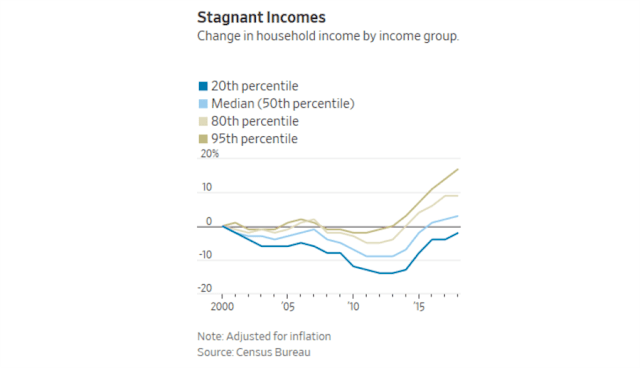 Yes, lack of wage growth is a problem, but as stated above, it is also a problem of the debt.


“The second reason has to do with the continuing effects of the debt households accumulated before the 2007-09 recession.

A new paper by Atif Mian, of Princeton University, Ludwig Straub of Harvard University and Amir Sufi of The University of Chicago found that rising income inequality over the past few decades created the conditions that fed the rise in debt held by lower-income households in the early 2000s.” – WSJ


The Fed Sees It

Every three years the Federal Reserve releases a survey of consumer finances that is a stockpile of data on everything from household net worth to incomes. The last survey was completed in 2016, however, that study will be updated in October 2020. It will confirm little has changed over the last 3-years for those in the bottom 90%.

The full Federal Reserve report can be found here, but I wanted to point to two charts specifically which confirm the Fed’s policies have exacerbated the wealth gap. As I stated previously, the top 10% of asset holders greatly distorts the view of the economy as a whole. For the bottom 90%, there hasn’t been much improvement. 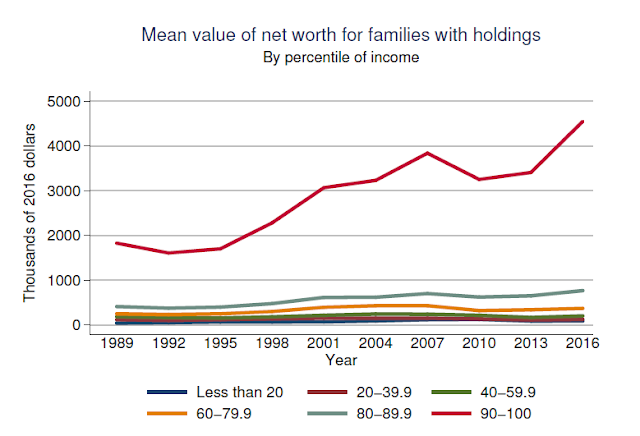 This is also why there are record levels of individuals 65 and over still in the workforce. It’s not that they don’t want to retire, they simply can’t afford to.

Since the bulk of the population either does not, or only marginally, participates in the financial markets, the “boost” has remained concentrated in the upper 10%. The Federal Reserve study breaks the data down in several ways, but the story remains the same. 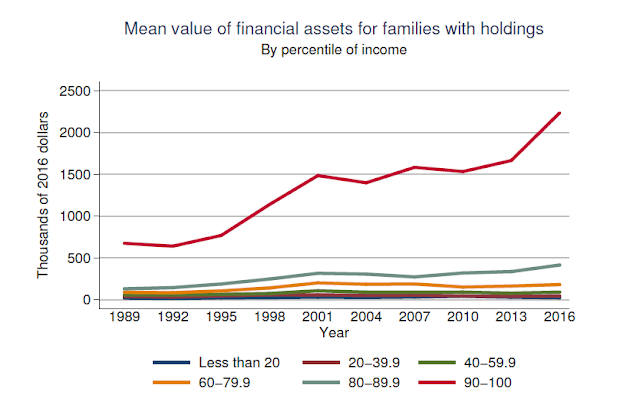 While the Federal Reserve had hoped inflating asset prices would boost consumer confidence, consumption, and ultimately economic growth, it didn’t occur. Instead, falling incomes and rising costs of living, impaired the ability for 90% of families to save and invest. Again, the benefit of the Federal Reserve’s interventions was clearly concentrated in the top 10%.

Not Getting Any Better

As noted, the Fed will update their study of consumer finances this year, but the WSJ confirms not much will likely change.


“As of December 2019—before the shutdowns—households in the bottom 20% of incomes had seen their financial assets, such as money in the bank, stock and bond investments or retirement funds, fall by 34% since the end of the 2007-09 recession, according to Fed data adjusted for inflation. Those in the middle of the income distribution have seen just 4% growth.” – WSJ 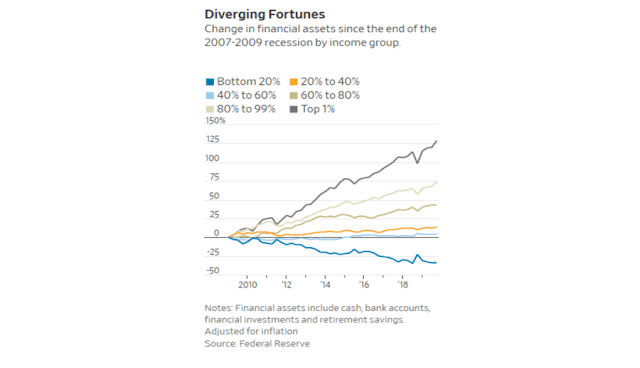 This isn’t surprising. A recent research report by BCA confirms one of the causes of the rising wealth gap in the U.S. The top-10% of income earners owns 88% of the stock market, while the bottom-90% owns just 12%. 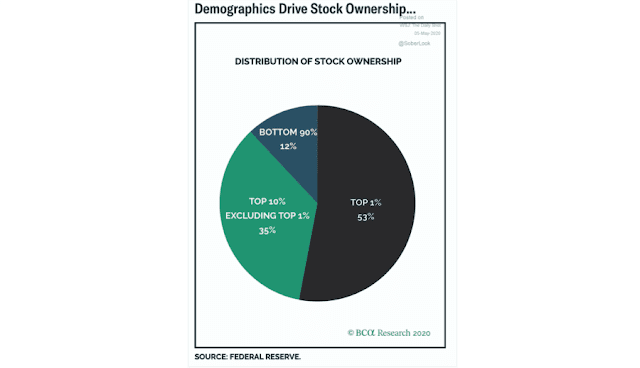 The lack of economic improvement is clearly evident across all data points. However, it has been the
very policies of the Federal Reserve which have fostered the burgeoning wealth gap. The ongoing interventions by the Federal Reserve propelled asset prices higher, but left the majority of American families behind.


The structural transformation over the last decade has permanently changed the financial underpinnings of the economy as a whole. This would suggest the current state of slow economic growth is the new normal, and interest rates will indefinitely be stuck at the zero-bound.

Such will be marked by continued volatile equity market returns, and a stagflationary environment, as wages remain suppressed while costs of living rise.

The end game of three decades of excess is upon us, and we can’t deny the weight of the debt imbalances currently in play. The medicine the Federal Reserve is prescribing is a treatment for the common cold; in this case a normal business cycle recession.

The outcome of those policies, while unintended, are destroying the bottom 90% of the population who suffer from a “debt cancer.” Trying to solve a debt problem with more debt is akin to giving a patient “aspirin” for the pain. While such a prescription may temporarily mask the “pain,” it is not a “cure.”

If it was, then a rising percentage of Americans would not be supporting the idea of “socialism?”
Posted by Doug at 10:52 AM