A Nation Drowning in Lies: Massive Lies and the Largest Fraudulent Election in History

“If you tell a lie big enough and keep repeating it, people will eventually come to believe it. The lie can be maintained only for such time as the State can shield the people from the political, economic and/or military consequences of the lie. It thus becomes vitally important for the State to use all of its powers to repress dissent, for the truth is the mortal enemy of the lie, and thus by extension, the truth is the greatest enemy of the State.”

The entire Democrat-Media-Entertainment-Deep State complex (incl. top echelons at the CIA, DOJ and FBI) has maintained an endless drumbeat of false accusations directed at President Trump during his entire administration and during BOTH of his campaigns. It's been non-stop lies as 93% of all Big Media coverage was shown to be negative by Media Research. And that doesn't count their lies of omissions for not reporting positive news such as the recent outbreak of peace in the Middle East thanks to Donald Trump. This got ZERO coverage at all the mainstream media outlets. Good GDP news was barely covered for 4 years.  FRAUD!
Then, this same CABAL was all friendly and positive for the Biden campaign by asking the dementia-addled candidate softball questions, never panning away to show that the venues were empty when Biden or Harris spoke.
Speaking of total corruption, the US media complex was entirely successful in killing the entirely convincing evidence that the Biden's are compromised and/or beholden to the Chinese Communist Party with sweetheart deals and/or bribes --- not unlike Hillary's massive pay-to-play scheme.
The CEO of Hunter Biden's shell corporation of graft, Tony Bobulinski, a life-long Democrat, came forward to warn the American people of all the details of their sordid Biden corruption. Joe Biden was part of $millions in graft from China's communist party-linked companies. Again, the nation was left un-informed. Also add that Biden bragged that he got a Ukrainian prosecutor fired so as to not expose Biden family's Burisma corruption.
The "fix" was in for Biden and Harris all along.   For all practical purposes, Biden and Harris didn't even campaign. Apparently "The plan" was for him to stay hidden even during the last week of campaigning, but Trump was having dozens of gangbuster rallies with massive attendance and enthusiasm. So Joe and Kamala "hit" the campaign trail at the end and spoke to empty fields and empty venues. Cher try to cheer on a handful of Biden supporters in Las Vegas before she gave up entirely in just 10 or 15 minutes. No one was there. Meanwhile Trump had a reported 57,000 followers show up outside of Pittsburgh. Biden and Harris basically hid from view and said little to avoid making gaffes and showing incompetence.
During election night as Trump saw comfortable leads in all of the toss-up states, then suddenly counting was discontinued late night on November 3rd in all these key states! Mere 4 or 5 hours later, in the middle of the night, suddenly those leads were dramatically reduced with 10,000s of ballots for Biden (only) were produced. Countless other irregularities are also reported.
Remember, Nancy Pelosi told us months ago that it would appear that Trump would be winning on election night, but then it would change later.  Also, Biden slipped in a very recent interview, saying that "he had assembled the biggest voter fraud organization in history."
These people told you their plan.

The entire massive Democrat-Media-Entertainment-Deep State COLLUSION has maintained an endless drumbeat of false accusations directed at President Trump throughout his administration and during BOTH of his campaigns. The election interference or "meddling" is really outrageous. Russia didn't "meddle" in elections, the DEMOCRATS did!
Fraudulent FISA warrants allowed Obama, Hillary and Democrat machine to spy on Trump before and after the 2016. No one has paid any price or has been held accountable. This led to the Mueller scam, the post-Mueller scam and an endless number of frauds thereafter. This unholy alliance has created propaganda and election-meddling interference on steroids all along---all the way to Trump's 2nd election night.
The corrupt Left-wing media cabal has been creating fraudulent reporting all along: the Russia Hoax, the Mueller "Investigation" Hoax, the still-ongoing Mike Flynn Hoax, the Roger Stone Hoax, the RENEWED Russia Hoax after it was debunked!, the despicable Fine People Hoax, all the variously insane Hate Crime Hoaxes, the White Nationalist Hate Hoaxes, the "Nation of Hate" hoax at CNN, the "Impeachment" Hoax and on and on.......
Trump was accused of quid pro quo in a Ukraine Hoax, but it was Biden that was proven to have had undue influence on Ukraine.  Biden bragged that he got a Ukrainian prosecutor fired so as to not expose the Burisma corruption in obvious quid pro quo..
Trump was accused of collusion with Russia, but it was Hillary that was found to have colluded with Russia by creating the Steele dossier and an underhanded deal to sell USA's Uranium One to the Russians in a huge graft scam that included Mueller and Rosenberg from the FBI!
We know that Google subversively altered search results to give more Democrat-led "news" articles and less of Conservative ones. One study shows that Google has been able to manipulate search results to shift 15 million votes to the Left without any paper trail.
Twitter is notorious and obvious about it's war on Conservatives, led by Jack "Rasputin" Dorsey who hides in a foreign country for his own safety apparently. He admitted in testimony that they basically employ a mob-rule style of fact-checking and censorship. It's mob is full of know-nothing 20-something Leftists on the both coasts that decides "truth" according to these little idiots.
After the 2020 election, The Fraud News Networks have all lost their minds in insanely biased propaganda and virtually 100% biased FOR Democrats and against Trump and Republicans. Their insanity and hatred AFTER the election is really off-the-charts.  From Martin Armstrong:

"A Milwaukee news anchor is off the air for saying why “Jeopardy” host Alex Trebek died this year while Senate Republican leader Mitch McConnell keeps on ticking. CNN International anchor Christiane Amanpour, who I once respected, compared President Trump’s four years in office to Kristallnacht which began the Holocaust in Germany. The sheer hatred being put out by those on various news organizations is unbelievable."

Other frauds that we know of:
Voting software with known glitches, Dominion Voting, was used in 33 states and in all the battleground states. In Michigan, a "glitch" in the voting software caused 6000 votes to be transferred to Biden from Trump......until someone discovered it. This is the same system scam used in 33 states. 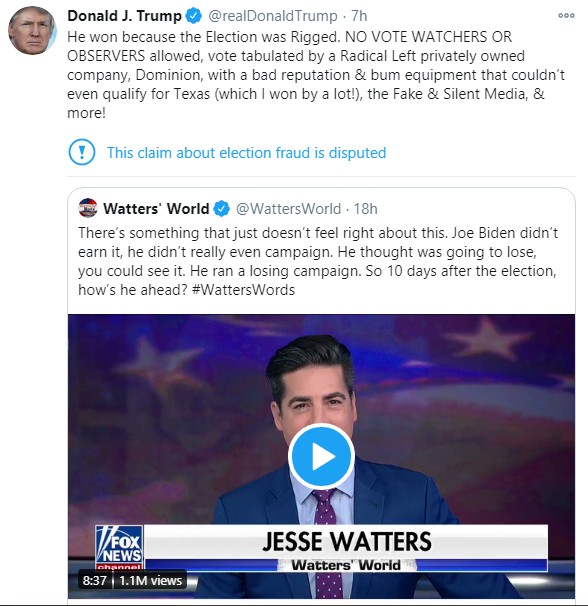 TENS OF THOUSANDS OF BALLOTS Dropped Off in USPS Boxes at Detroit Absentee Ballot Processing Center at 3:30 AM After Election  About 38,000 ballots showed up mysteriously at 3:30 am at the Detroit center. Strangely, no ballots had arrived at the TCF Center for over six hours, and many poll workers in the facility sat around with no work to do while getting paid.   According to Michigan election law, all of these mail-in and absentee ballots had to be submitted before 8pm on Tuesday night in order to be lawfully accepted and counted.

Pennsylvania County Official: Thousands of Mail-In Ballots May Be Lost Nearly 40,000 registered voters in the county requested mail ballots. So far, only 24% of them have been returned to the county, by far the lowest rate among the state’s 67 counties. The county with the next-lowest return rate, Fayette, has received 50% of requested ballots.

Trump has warned all along that mail-in ballots would be a horror show:  Wisconsin Authorities Investigate Absentee Ballots Found In Ditch, As FBI Probes Discarded Pro-Trump Ballots In PA
Texas Poll Watcher Testifies On 2020 Voter Fraud In Houston, Has PHOTOS  Texas poll watcher Raymond T. Stewart, a retired police officer, submitted a sworn affidavit Thursday that was provided to the Harris County District Attorney’s Office. That affidavit, exclusively obtained by NATIONAL FILE, alleges that a Houston precinct judge and staff illegally used a stack of driver’s licenses in their possession to allow people to vote illegally in the 2020 election at a drive-through voting window created by the Coronavirus pandemic

Biden’s Texas Political Director, Other Democrats Accused In Illegal Ballot Harvesting Scheme According to a lawsuit filed with the Texas Supreme Court Monday, Democrat presidential nominee Joe Biden’s political director in Texas has been accused of ballot harvesting in Harris County. Harris County is Texas’ most populous county; Houston is its and the state’s largest city.
What I find most disturbing is the impunity with which Democrats are gaming the system. They’re not even trying to cover their tracks. They are 100% certain that there will be no consequences for their actions. They know that the media, which should be a watchdog on behalf of American citizens, is actually an arm of the Democrat party that will do everything necessary to cover for Democrat election crimes.

The ONLY way out I see is to declare the 20th Amendment unconstitutional for its lack of a process in the middle of a national emergency making the election impossible [Doug here, the 20th Amend is the place that puts a hard date on the election and for inauguration, but Armstrong is arguing that we need an "extension" in the current election due to shear quantity of irregularities]. Put Pence in charge temporarily and call for a new election banning mail-ins other than people actually unable to vote such as invalids or those overseas. Create an APP whereby everyone votes online. It cross-references to the IRS and sees if they are currently filing taxes. The IRS can send the link to vote and that will eliminate dead people voting. Then, perhaps the nation MIGHT accept the winner. Otherwise, as Julius Caesar said, people will still believe what they want to believe.

Your entire blog is, truly absolutely outstanding!!! On FASCISTBOOK it goes.

He does a good job laying it all out. It was pretty obvious from the start that the election was stolen. I just hope Biden and Harris aren't allowed to open the floodgates to the third world savages like they've been wanting to do. If they're able to do it they will and this country will be destroyed in a few years or less.

Yes he does he does an outstanding job laying it all out. And I couldn’t agree more with you my friend are nation will be destroyed and I’ve already read everything Joe Biden has land on his first day in office by executive orders. Dropping our country in the Paris climate accord. Stopping the border wall build. Lifting the travel ban on all Muslim countries and letting him up to 100,000 a year come.

The list goes on and on and you can read it over on Fox News website it not only made me sick at my stomach I cried I absolutely cried because I’m so afraid for our country and I love this country. Everything he plans on doing will not benefit our country whatsoever. I wouldn’t have anything against him if he would just do things that would help our country but that’s not going to happen.

Doug
30 years of international oil and gas project experience but now early-retired. I hold a Bachelors of Chemical Engineering and an MBA in Economics. I have traveled the world widely for work and pleasure and call the US Gulf Coast my home. Contact me at: gulfcoastcommentary@gmail.com.