We're Literally on the Verge of Revolution --- Both Here and Abroad

Three pieces today in Martin Armstrong's blog give even more urgent credence to his understanding that the Covid "crisis" is being used to usher-in a totalitarian state of control and lockdown in the developed world.  They call it the Great Reset, but it's really a communist revolution underway in the EU, Canada, the USA and Australia under the guise of a Covid "crisis."

This is happening just as Democrats have made an outrageous effort to steal the 2020 election from Trump. Evidence keeps mounting of the outright criminal activity of the Democratic Party in many key State elections. Trump is the only thing standing in the way of this global power grab.

We're literally on the verge of revolution---both here and abroad. It's entirely possible that the Democrats will be caught in their gambit. I can see the Democratic Party being "decertified" due to their massive fraud. We are entirely reliant now on Trump, Sydney Powell and Linn Wood for our country's survival and to avoid a civil conflict in the US.

Democrats are eager to join this Global Reset to assert total control through the "Green New Deal" which is a huge power grab as I discuss in the links below. Warnings of this totalitarian Globalist takeover/power grab are leaking out not only from Martin Armstrong, but Archbishop Vigano and from many Conservatives including myself.

Biden will be pushed out of the way for more "useful tools" like AOC and Kamala Harris, don't kid yourself. The US Democratic party is completely in-sync with Klaus Schwab's and Thomas Piketty's global reset or Communism 3.0. We're at a dangerous place if Trump loses.

Take a look at these recent posts on this blog:

Accelerating US Collapse Due to Massive Incompetence and Corruption

Here's the recent Posts from Martin Armstrong. Each Sub-title is a hyperlink to each Armstrong blog: 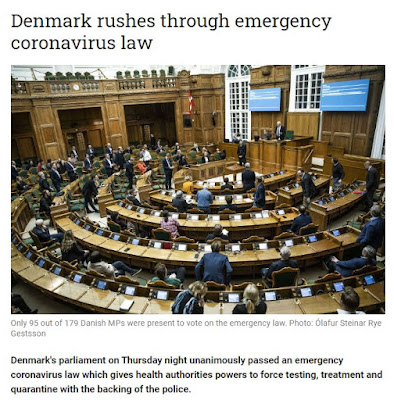 Denmark has taken a major step to a totalitarian state. This new law allows forcing people who test positive for ‘dangerous diseases’ to be ‘medically examined, hospitalized, treated and placed in isolation’. This further grants the Danish Health Authority the power ‘to define groups of people who must be vaccinated in order to contain and eliminate a dangerous disease’. The government can now coerce people who refuse to have the vaccine ‘through physical detainment, with police allowed to assist’.

These clauses present the collapse of all freedom. The government can simply say they “think” you are a member of such a group they define arbitrarily without any court to step in with respect to human rights. All individual liberty is now officially extinguished. This law allows full discretion to government officials with respect to defining what is now even a ‘dangerous disease’ and which groups will be forced to take a vaccine.

All the lessons of tyranny born with such horror and human suffering, for which so many gave their lives in defense against such unbound discretion handed to government agents, has been pushed aside. This agenda is being imposed because SOCIALISM is collapsing – they can no longer fund the pensions and programs for they can no longer borrow other people’s money. Instead of revising the system to preserve our humanity, world leaders have chosen the path to authoritarianism and the end of all our rights.

We no longer have world leaders who even remember World War II. They think only about their own status and power. They do not represent us. Just open your eyes, they are all using the very same slogan – Build Back Better.

Now listen to the words of Schwab. His set has the same slogan. This is the 2030 Agenda being pushed by the World Economic Forum. They believe they can terrorize people with the virus and keep the people locked down long enough to destroy the economy leaving no choice but to accept their agenda.

I have warned that this 2020 election was NOT simply Republican v Democrat or even Trump v Biden. This is about the very survival of the United States for they are counting on Biden being senile enough to have the sovereignty of the United States to the United Nations and fulfill George Soros’ dream of a one-world government.

My family fought in the American Revolution and in every war ever since. This is my contribution to have access to those who dissent and wish to save what we have.

Please repost this everywhere. We need to build momentum or everything will be lost. 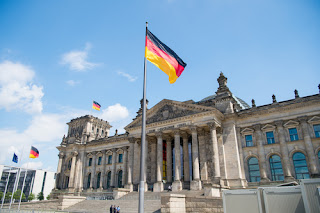 Germany just passed the new law on infectious diseases, which means now the govt will be able to, “legally”, mandate closures of businesses, lockdowns, masks, testing, and any other tyrannical measure they want, under the pretext of any virus/disease.

There were several thousand people peacefully protesting this law today in Berlin. As usual, the cops attacked them with brutal force (water cannons, tear gas, etc), and arrested over 200 people.

As of 12:01 am Thursday, 19 November 2020 South Australia time, the whole of the state of South Australia will be placed under house arrest for a period of 6 days – at least initially. All this due to a few people testing positive for covid19.

As I write this, there are currently only 35 active cases (test positive – not necessarily with symptoms), 2 in hospital, zero in ICU, and for this, they throw us all in-home detention.

Trudeau Has Joined the Conspiracy

Trudeau, Prime Minister of Canada, has just come out publicly confirming now that Trump is out of the way, they will bring about the Great Reset.

They will achieve equality by reducing the wealth and employment of the middle class while the superrich will become the overlords of this new normal. They are deliberately destroying the economy to create economic chaos for they believe they can rebuild it GREEN and end the disparity of income which is Communism 3.0.

Trudeau, PM of Canada, has just come out publicly confirming now that Trump is out of the way, they will bring about the Great Reset. They will achieve equality by reducing the wealth and employment of the middle class while the superrich will become the overlords of this new normal. They are deliberately destroying the economy to create economic chaos for they believe they can rebuild it GREEN and end the disparity of income which is Communism 3.0. There have been leaked letters many say are fake because Trudeau had come out and had to deny them three times. They have said what he is saying just with more detail.

There is a great risk that they will seize all assets and you will own nothing precisely as Klaus Schwab has been telling these leaders when they come to his World Economic Forum at Davos. Schwab and Thomas Piketty are out to conquer the world and force Marxism once again by sheer authoritarianism/tyranny. They have used this fake pandemic to terrorize people in order to collapse the economy. These politicians no longer represent us – they have crossed the line into despots. They do not believe in capitalism, freedom, and human rights. We are the great unwashed, unworthy to be considered for we are too ignorant to know what is best for us or our family.

Their promises of utopia even Lenin knew were false claims. They wish to strip us of all freedom, keep us locked down to destroy our jobs and the fossil fuel industry, and then for survival hand us basic guaranteed income. If we dare to object, they will cut off all funds and starve us to death.

Trudeau has confirmed that Canada is on track for the 2030 Agenda following the World Economic Forum. Those who foolishly voted for Biden will soon realize they voted against their own self-interest, employment, their families, and their posterity. Listen to the words of Trudeau, then listen to Schwab’s 8 predictions for 2030 that Trudeau has just endorsed. All the European leaders are also on board as are the Democrats in the USA. Biden will declare a national lockdown in February and it will not be for just 4 to 6 weeks.

For those who think this is all BS, you better start opening your eyes and your mind or you WILL lose EVERYTHING! We do not have a lot of time left. They will suspend elections next come 2022.

Doug
30 years of international oil and gas project experience but now early-retired. I hold a Bachelors of Chemical Engineering and an MBA in Economics. I have traveled the world widely for work and pleasure and call the US Gulf Coast my home. Contact me at: gulfcoastcommentary@gmail.com.