From the EIA, worldwide oil and gas liquids production peaked at 102.3 million bpd in Q3 of 2018.  It has fallen by 11% to 90.9 million bpd in Q3 2020.  It's appears to be stabilizing slightly. The US drilling rig count has fallen by over 70% since last year. And that's after MASSIVE amounts of money (debt) injected into the world economy.  I'd say we got very little bang for our buck. World debt levels, already high and possibly unsustainable, are rising into the stratosphere.

According to the oil expert Art Berman, US oil production will eventually fall by the same margin as the drilling rig count or 70%, if the rig count stays depressed at current levels. But the oil price needed to increase the rig count appears to be above $50 or $60 per barrel. With the world in Depression, consumers probably can't afford that. I don't think it's going to happen.

If Art is correct expect an eventual decline of US production to about 6 million bpd (a 70% decline) in the coming years. It seems crazy, but he's THE expert in oil and gas.

The huge increase in US production (shale 'miracle') in this past decade hid the decline of production worldwide. So, if the US will lose another 12 mmbpd in the next few years, then world production could decline to 78.9 million bpd (from the peak of  above).  That would represent a 23% decline in world production from 2018.

But this represents a total decline of 23% (or an additional 11% lower) for the world economy in the next few years. Remember: energy IS the economy.  That amount is solidly in Great Depression territory.  This is pretty much baked in the cake at this point. We're already in a 'regular' economic depression, so we're heading for a truly Great Depression.

The reason it's baked in the cake is that it would take a large world oil price increase to fund a rise in the rig count and production. Only rapidly rising US and world debt can stimulate that demand. But how long can that go on?? And we're already seeing perverse market bubbles in bond and stock markets and bitcoin. Inflation is already perking up. The shift from money to "hard" assets has begun.

In 2015, I wrote in my post End of Cheap Energy and Peak Debt Levels Presage Collapse

..that we've reached "peak-cheap-oil." This means that the marginal cost of oil is so high now that when additional barrels of oil are demanded -- as is the case when the economy grows -- oil prices rise so quickly that it hurts consumer incomes and puts the economy in recession. That happened in 2008 when oil prices hit $140 per barrel. Consumers found their budgets so pinched that many stopped paying their mortgages. Mortgage debt stress morphed into a financial crisis and deep recession. In 2015, oil prices greater than $100 caused the economy to slow. 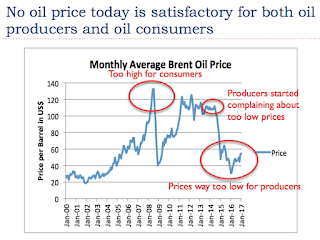 The era of cheap energy is over. If the economy tries to recover, oil prices rise so high that it kills the economy/consumers. If we can't afford high oil prices, then we cannot have growth.  And the price at which oil is affordable, ie., $30 to $40 per barrel, hurts the oil producers and oil producing countries (and kills oil exporter countries government revenues). Remember, most Middle Eastern countries need $100 oil to subsidize their populations. The subsidies continue with governments selling debt.

So, energy production will eventually drop and all the nations, and especially the oil and commodity producing countries, will tend to remain in recession with large deficit spending. What's needed to "save" us is cheap, ie., $10 oil, for an extended period or a miracle in cheap energy technology.

From Gail Tverberg's post at OurFiniteWorld.com: "Energy Is the Economy; Shrinkage in Energy Supply Leads to Conflict" she states that:

We are hitting energy limits right now. Energy per capita is already shrinking, and it seems likely to shrink further in the future.... In total, the world becomes a poorer place. How is the pain of this reduction in energy consumption per capita to be shared? Is it fair that travel and restaurant workers are disproportionately affected? Worldwide, we are seeing a K shaped recovery: The rich get richer, while the poor get poorer. A major issue is that while we can print money, we cannot print the energy supplies needed to run the economy.
The world economy seems unable to accommodate 7.8 billion people, and we will have no choice but to face this issue.

In Figure 3, Gail "added a rough estimate of the expected drop in future energy consumption that might occur if either (1) the beginning of peak fossil fuels is occurring about now because of continued low fossil fuel prices, or (2) world economies choose to leave fossil fuels and move to renewables between now and 2050 in order to try to help the environment. Thus, Figure 3 shows my estimate of the pattern of total world energy consumption over the period of 1820 to 2050, at 10-year intervals."
(Figure 3 assumption: Estimate by Gail Tverberg of World Energy Consumption from 1820 to 2050. Amounts for earliest years based on estimates in Vaclav Smil’s book Energy Transitions: History, Requirements and Prospects and BP’s 2020 Statistical Review of World Energy for the years 1965 to 2019. Energy consumption for 2020 is estimated to be 5% below that for 2019. Energy for years after 2020 is assumed to fall by 6.6% per year, so that the amount reaches a level similar to renewables only by 2050.)
Several other views of the same projections on a "per capita" basis:
(Figure 4 Assumptions: Amounts shown in Figure 3, divided by population estimates by Angus Maddison for earliest years and by 2019 United Nations population estimates for years to 2020. Future population estimated to be falling half as quickly as energy supply is falling.)

Rise of National and International Conflict

Gail says "If we look back at what happened in Figure 5, we find that when the 10-year growth in energy consumption is very low, or turns negative, conflict and bad outcomes are typical. For example:

Also rising conflicts for finite resources are likely to lead to wars, maybe even catastrophic wars.  Deagal.com, a defense intelligence source, is now projecting nuclear war between a united China-Russia block that will wipe-out billions of people by 2025 for a number of reasons. I'll post the Deagal.com information in my next post. This is all in line with the Fourth Turning's total war climax due by 2028 --the end of the 20 year crisis period that began in 2008.  See my post  Burn. It. The. Fuck. Down. Our Rotting, Corrupted, Bloated, Failing Status Quo Must Burn.
A depressionary world economy will see huge hardship in the poorer countries, the ones reliant on consumer demand from the developed world. It's already starting. Loss of income and loss of food in the poorer countries will lead to starvation, conflict for resources and falling populations. From Figure 4, Gail predicts that world energy consumption will fall to 28 gigajoules per capita in 2050 or about the same energy intensity as India, ie.,very low.
The only thing that can change this trajectory is more debt and Govt spending in the developed nations (with no further default crises). It can't continue forever, as all nations --developed and developing-- are already heavily debt laden including China. So, the magical solution is more money "printing" by central banks--to fund the government(s) spending. That'll work for awhile until stagflation erupts. (See my post "The US Dollar is Being Devalued--Probably By A Lot.")  Then the Central Banks will have to control the yield curve with even more money "printing." Exponentially rising money spells doom (eventually). See my post Extremes of Unsound Money and Finance Will (Eventually) Lead to Catastrophe.
Gail says:

Trying to get [oil] demand back up through more debt seems likely to lead to debt bubbles, which will be in danger of collapsing. There may be temporary price spikes, but a permanent fix is virtually impossible. This is why I am forecasting the severe drop in energy consumption shown in Figures 3 and 4.

She concludes "I assume that population drops only half as quickly as energy consumption falls after 2020 (or 3.3% per annum). Total world population would then drop to 2.8 billion by 2050." This is the same world world energy consumption per capita level as 1920.
This is the slow collapse scenario I discussed in my post Fast Collapse or Slow? I Think Fast.
Posted by Doug at 3:53 PM