The Third Obama Term: In Bed With the Mexican Cartels Again

Biden, Harris and the DemoCRAPS have hung out the welcome mat once again at our Southern Border. 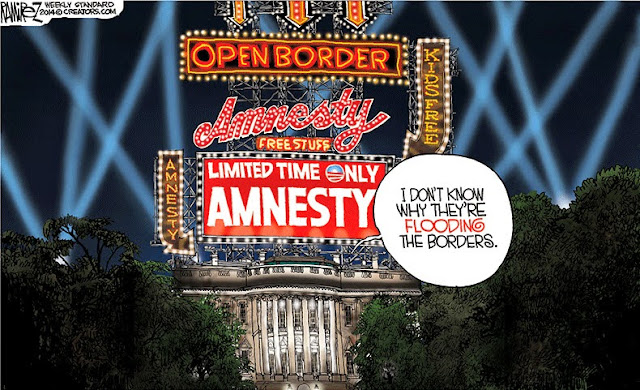 We have an immigration problem AGAIN because would-be illegals know that we have very lax enforcement -- meaning that they know that they can come in on a visa and just overstay (or walk across our southern border and stay) -- with little risk of consequences. The Federal government has even worked against effective enforcement; which essentially gives immigrants a green light to come or stay here illegally.

From WAY BACK LONG AGO from my 2012 post "It's Not Smart to Enforce Immigration Laws.." I said:

Obama and his DOJ has been encouraging anarchy at our borders for several years now. They keep refusing to enforce immigration laws and the result is vastly increased surges of illegals taking advantage of this "wink and a nod" acquiescence by our chief executives.  But lax enforcement is the root cause of our current population of illegals. See my blog Lax Enforcement Causes Our Current Immigration Problem.

Obama has publicly said in recent months that he would unilaterally stop the deportation of illegal children despite what the law says. The result is a surge of illegal immigrant children crossing the border this year.

The Washington Times reported yesterday that 60,000 children are predicted to be dumped at the borders this year and this number is expected to double next year.


Children traveling without their families, including an “overwhelming” number younger than 12, are flooding across the southwestern border in the latest test of the Obama administration’s immigration policy.

Homeland Security Officials predict that 60,000 minors will cross the border this year and that the number will double next year, accounting for an astonishing percentage of people trying to jump the border — braving the tremendous perils of crossing Mexico and trying to evade border authorities, hoping to eventually connect with family in the U.S.

And why wouldn't they?  The radicals in Washington DC have announced that nothing will be done.  In fact, ICE is delivering some of these children to known illegal families and thereby aiding the child smugglers associated with the Mexican drug cartels.  You see, illegal immigrants living in the United States are paying human traffickers connected to Mexican cartels to smuggle their children into the U.S.

ICE is completing the final leg of the journal: delivery to the families.  Yep, you read that right, the administration is now doing the work of the child smuggling drug cartels in Mexico.

The Obama err Biden errr Harris administration is ONCE AGAIN NOT enforcing immigration law and a predictable new refugee crisis has erupted at our southern border. It will surely bring chaos to border states AGAIN.

And by accepting illegal immigrant children and uniting them with illegal families residing in the US is, in essence, completing delivery of many children for the Drug Cartels. You see, the Mexican drug cartels have been trafficking children into the US for money.   So, Obama Biden is on the side of the drug cartels whether he realizes it or not.