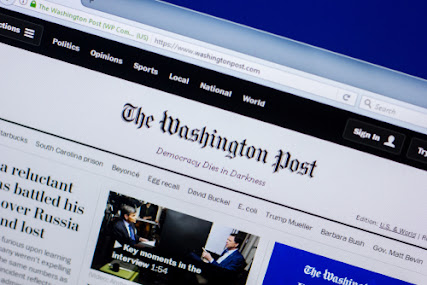 Those in management at most of the mainstream media should be dragged from their offices and charged with conspiracy to overthrow the United States government and to eradicate the US. Constitution.

The Washington Post displays its motto “Democracy Dies in Darkness” and indeed they are at war against the United States just as Klaus Schwab and his World Economic Forum which is out to remove the United States as a superpower and transfer that status to the United Nations. Their reporting, along with CNN, New York Times, ABC, NBC, and CBS along with most others, are indeed conspiring to overthrow the United States and if they were put on trial using their own words, any unbiased jury would find them guilty.

The Supreme Court’s key decision in 1964 in New York Times Co. v. Sullivan, 376 U.S. 254 (1964), which has since protected many media outlets from lawsuits. It is time that it should be scrapped along with total immunity for vaccine companies. If you buy a car and you turn on the ignition and it blows up, is not the auto-manufacturer liable? In every other field, companies are responsible for the products they produce. Why is the media and vaccine companies have any immunity whatsoever? In that case, Supreme Court reversed a libel damages judgment against the New York Times. The decision established the important principle that the First Amendment guarantees freedom of speech and press may protect libelous words about a public official in order to foster vigorous debate about government and public affairs. To sustain a claim of defamation or libel, the First Amendment requires that the plaintiff show that the defendant knew that a statement was false or was reckless in deciding to publish the information without investigating whether it was accurate.
Facts

I believe that the deliberate bias in the media is historically the first step taken by any potential authoritarian or dictatorial regime is to gain control of communications, especially the delivery of news. The one-party control of the press and media in the United States and worldwide is a serious threat to a viable democracy and human rights. This is giving support for the unelected movement of Klaus Schwab and his World Economic Forum working with the United Nations to usurp control of the global environment without ever allowing the people to vote. The media is simply taken up the role of propaganda agent no different than Pravda during the communist days of Russia.

The First Amendment guarantees a free press to foster a vibrant trade in ideas. However, when the press is so biased, they are deliberately distorting the marketplace and the rights of the people. The media is advocating positions from unelected entities and denying any right to allow the people to vote. Hence the motto of the Washington Post “Democracy Dies in Darkness” is precisely their new objective--to kill Democracy. Since mainstream media has proven its eagerness to distort the news, it is profoundly unjustified in any legal foundation to provide any immunity whatsoever and they are deliberately engaging in treasonous conduct and should be hauled into court where ONLY a jury is allowed to decide the facts.
Posted by Doug at 7:47 AM