"Woke" is Black Hatred of White Civilization: Even "Half-Blacks" Bring Disorder and Chaos

The word "Woke" is from US black vernacular that refers to a perceived awareness of issues that concern social justice and racial justice. Already, you know you're in big trouble, because anything "black" (US version especially) means near total ignorance, failed thinking, lack of logic, a cultural collapse, and being wrong about everything.

First of all, speaking in the black ghetto vernacular is already a huge problem in that it immediately announces yourself as a low-class, ignorant, low functioning individual with low social and economic status in the eyes (ears?) of their listeners. But they're proud of all that!  And Black rappers glorify "ghetto speak" (and criminality) as a badge of honor. US blacks worship criminals, thugs, and glorify losers.  They are total fools. Woke is hatred of the world's pinnacle of cultural achievement, ie., White Civilization as seen in Northern Europe, Scandinavia and their descendents.

If every US black spoke perfect British english, complete with a British accent, for instance, like some Caribbean and Bahamian blacks, their perceived intelligence and status would instantly change for the better. It can be done, but the pressure to conform would completely make this impossible in US black communities. Any black trying that might not even survive.

I'm reminded of a documentary about the late George Martin, the famed producer of The Beatles, also known as "the fifth Beatle." The documentary is a long and excellent interview with him about his life and included conversations with his son Giles. The most poignant thing that stood out to me was when he said that he was born and raised in London's less "posh" neighborhood and had a "low class" accent.  He said it was terrible. As a reminder, the Brits have always been very, very class conscious, so Mr. Martin decided to adapt the accent and speech of the BBC announcers which were considered "posh." He adopted "posh" speaking for the remainder of his life and it served him very well in his career.  This is what INTELLIGENCE looks like. This is also WHITENESS! Mr. Martin never worshipped any thug or their criminality either.

You see, successful people do everything right: they show up to school, they do their homework, they save their money, they have the right ideas and attitudes, they think ahead about the future.  On the other hand, unsuccessful people, like most US Blacks and "poor" people of any color, do everything wrong, are unable to function in any civilized setting, can't bother to show up to school, never do homework and are full of bad ideas. And when their lives are shit, they are UNABLE to see that it's their fault (of themselves and their parents).

Then, in true "loser think," they blame their failures on anyone but themselves. Blaming others for the problems that YOU create is the very essence of "Woke."  It's LOSER THINK.

You can throw all the money in the world at social programs for these people, but if there is laziness, addictions, bad ideas, bad attitudes and bad decisions, low intelligence, high criminality, little impulse control and high levels of violence, it will override any and all social programs. Of course the Left never wants to hear about personal responsibility.  They want to blame our economic system, take more and more of your tax dollars and piss that money away on programs that aren't working.

Black persons of any age will never be hired when they often can't speak right, they often can't dress right, when they often have no self-respect, no discipline, no education or have bad ideas or are racist against White people. This is the problem today, yesterday and 50 years ago. Who in their right mind would hire them?  No amount of money spent, no government bureaucrat and no bureaucracy can fix this.  Why don't we admit that we've failed?

Why can't US Blacks admit that they've failed? Blackness IS failure and Un-culture. "Woke" is bullshit, hatred of Whites and White civilization and a failure to take responsibility of your own failure.  Instead, you get 100% denial, 100% blaming White people, then insults and a punch in the face, as they happily cash their SNAP payments, rent subsidies, income supports, etc., etc.  Talk about biting the hand that feeds you!

Speaking of failures, I can't help commenting about Meghan Markle and her disruption of British life. Even "Woke" half-black persons are poison for themselves, their communities and their countries. Everything they touch turns to shit. Meghan and her husband felt they had to flee the UK after their idiocy bought down a mountain of criticism upon themselves. You go woke, you go broke.  Now, she's bringing her destruction back to America.  Thanks alot you attention whore!! She's a whore for attention and a whore for money and status. 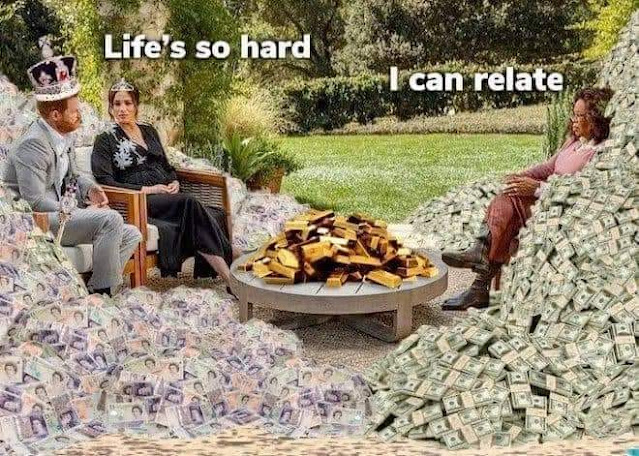 Brendan O'Neill, the Republican editor of Spiked, wrote that Harry and Meghan's purpose was to "position themselves as the king and queen of victim politics."

Todd Starnes wrote, "Like a good woke American, Ms. Markle charged that the royal family was bothered by the skin color of her son. When you don't have a legitimate grievance, you always play the race card ... For Prince Harry to allow his wife to make such a scandalous charge without naming names is cowardly. But it's also very telling—I suspect the Mrs. was spewing fake news."  Meghan is poison.

Obama, another half-black and an extremely mediocre dude, was vaulted by affirmative action programs thru schools (supposedly)  into government and the presidency (probably as a CIA project). But he did nothing but divide and denigrate our country, failed at every policy both foreign and domestic, he started a race war and a war on police that continues to this day. Obama, steeped in African Marxism and Islam, had all the wrong ideas and was wrong about nearly everything. Obama disrupted US life in a major negative way, not unlike ungrateful Markle. Obama is poison.

You see a trend here?

All of these Leftist/Marxist people want to wallow in the distant past, and wallow in victim-hood and keep "ancient" history alive to complain in an attempt to stay relevant.  The truth is that The Left is now entirely deluded, intellectually bankrupt, hysterical, irrelevant and entirely destructive. They can't move on. They have to keep dredging the past in a vain effort to stay relevant --- but they're entirely NOT.

Outstanding! Simply “OUT-FUCKING-STANDING!!” after reading this I could hardly contain myself to get it posted over on fascistbook.
I absolutely love posting any and all things that piss off the far-left male / female nigger ass kissing white race. These kinds of white people, are a blight on our Nation. And to me it doesn’t matter if they are middle-age or college age. Once again, outstanding!
Bravo 🙌 Bravo 👏 Bravo 🙌